Birmingham stabbings: Manhunt as one killed and seven injured

One man has died and seven other people were injured following a spate of stabbings in Birmingham city centre. 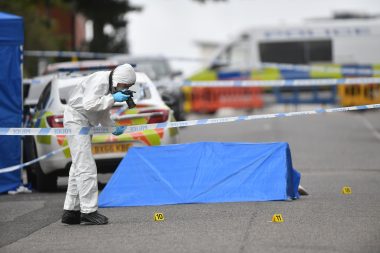 West Midlands Police said they received reports of a stabbing in the north of Birmingham city centre around Constitution Hill at about 12.30am on Sunday morning.

They say they also received reports of an incident in the nearby Livery Street.

West Midlands Ambulance Service (WMAS) received an initial call to Colemore Row and Livery Street at around 12.40am before further calls over the next hour and a half.

Ambulances were called to Irving Street at 1.52am and to Hurst Street at 2am, both in the south of the city centre. At each of those incidents, a number of stabbings took place according to the West Midlands Police’s Chief Superintendent Steve Graham.

A total of seven patients were treated by ambulance staff – five of which were taken to the major trauma centre at Queen Elizabeth Hospital Birmingham.

Three of the five taken to the major trauma centre had critical injuries and one man was pronounced dead shortly after arrival.

Police have said they are treating the stabbings as linked and are searching for a lone suspect as part of a murder investigation.

No arrests have been made at this stage and extra officers have been deployed.

The victims appear to have been chosen at random and there was no suggestion the attacks had been “motivated by hate” amid concerns at the incident in Hurst Street, part of the city’s gay village.

Detectives are appealing for witnesses in the areas between 12.30am and 2am, setting up a dedicated website for the public to share information, photos and pictures.

Prime Minister Boris Johnson tweeted: “All my thoughts are with those affected by the terrible incident in Birmingham last night. My thanks to the emergency services who are working hard at the scene.”

Labour Leader Keir Starmer tweeted: “As we wait for news on the major incident in Birmingham overnight, all our thoughts are with the victims and anyone else affected. Thank you to our emergency services.”

Do you have information, photos or videos which could help? You can send them directly to West Midlands Police using this link. 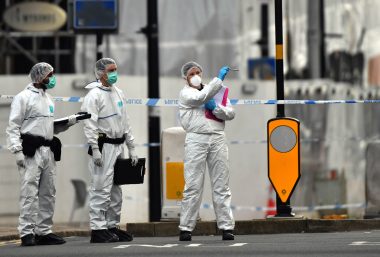 Three police forensics officers at work in Hurst Street, in Birmingham after a number of people were stabbed in the city centre. West Midlands Police said they were called to reports of a stabbing at around 12.30am on Sunday and a number of other stabbings were reported in the area at around the same time.