AS WEST Midlands Police step up their offensive against illegal off-road vehicles in Solihull, Observer news editor Lauren Clarke joined officers on their latest clampdown and to see first-hand the efforts they are going to to take the vehicles off the road.

“The off-road vehicles are the symptom of a lawless way of living,” Chief Inspector Jack Hadley tells me.

Sat in the back seat of the police car on the way to raid a suspected biker’s house, it felt like I had come full circle – from accepting calls from councillors and residents urging police to do more to tackle the problem, to writing the stories, to now about to witness law enforcement in action.

Jack read me a tweet from someone asking ‘what harm’ bikers caused to communities and, rather crudely, suggesting police spent their time ‘catching real criminals’.

But the reality is that off-road bikes have been causing Solihull residents problems for months.

Many had written into the paper complaining of sleepless nights, public paths torn-up by tyres, and parents too afraid to let their children play outside their homes for fear of being hit by a rogue biker. 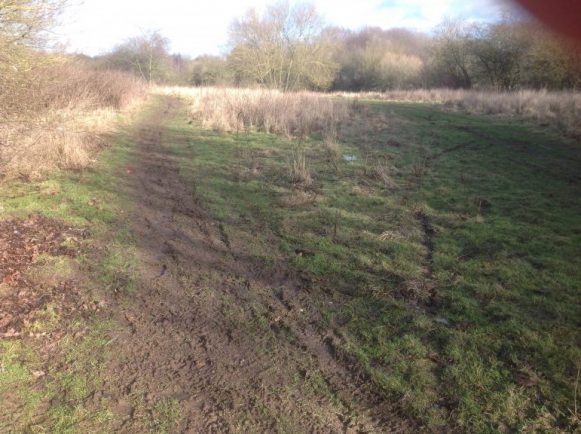 These bikes, many of which are ridden without insurance, MOTs or even helmets are not permitted on the roads and would have to meet the same requirements any other vehicle does to do so.

But that is the problem – many do not.

Earlier that morning I had sat in a room full of officers and partner agencies as Allan Green, police inspector for Meriden, explained how West Midlands Police were leading the way nationally in tackling off-road bikers.

Using legislation effectively, officers are able to enter the homes of people suspected of causing criminal damage using the bikes and seize the motors.

This is a far cry from the days when coppers used to chase the bikers on a bespoke police quad bike – itself a victim of cuts to the police budget.

Now other forces are looking to West Midlands Police for help.

“We had to change our tactics quite drastically,” Jack tells me.

“It has taken a few weeks for us to build up momentum and intelligence about the people involved.

“We had to change our own mindset from wanting to catch these criminals in the act of riding, to using intelligence to find them after.”

And that’s where the power of social media and technology has come in handy.

Officers have been reaching out to affected communities encouraging them to send in pictures, videos or descriptions of the riders.

From this, officers were able to start connecting the dots – knowing which biker wears which helmet or face covering, what vehicle they are driving and, if they are lucky, where they live.

Pulling up to an address on Kingshurst Way, officers had already gone through the front door and apprehended two men.

But as we opened the garage door, it became clear why we were here.

Officers recovered vehicle after vehicle – eventually lining up four quad bikes, and one off-road bike on the small front garden – and arrested two men on suspicion of criminal damage. 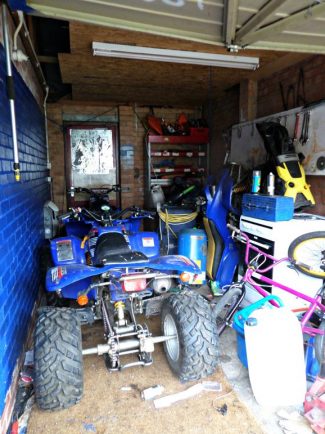 Down the road at an address on Ellice Drive in Smith’s Wood, officers arrested four people – including one for dangerous driving.

And while no vehicle was recovered at the address, police had enough intelligence to arrest the man in connection with driving an off-road vehicle.

At both addresses one person was arrested for public order offences – neighbours or friends of those arrested who took it upon themselves to tell the police what they thought about the arrests. 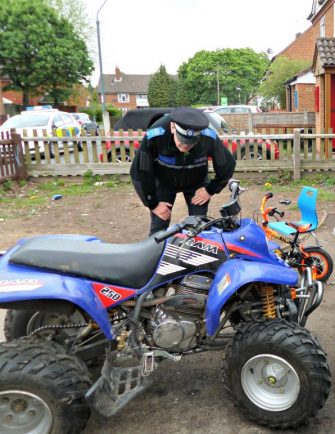 An officer inspects one of the recovered quad bikes. PHOTO BY LAUREN CLARKE

But this is part of the problem in catching off-road bikers, Jack explains – a fundamental lack of trust and respect for police on some of the estates in the north of the borough.

“A lot of our information comes from the public,” he said.

“But when residents who know the people responsible are not willing to come forward we have to work harder to earn their trust.”

At Ellice Drive officers also discovered large amount of cannabis, which saw two people arrested for cultivating cannabis and possessing a Class B drug with intent to supply.

And it is the criminality often linked to illegal off-road bikers which police are keen to put a stop to.

Crooks had recently been using disused storage lockers belonging to Solihull Council’s social housing team to store bikes away from their homes in the hope of not being caught.

But working with the council, police are closing the loopholes – with officers already recovering one stolen off-road bike hidden in a locker.

Ch Insp Jack Hadley said it was time residents were able to rest easy without being tormented by illegal riders.

“I’d urge anyone with pictures, videos or information – however inconsequential they think it may be – to get in contact.

“These bikes are causing misery to communities, and we will continue to clampdown on the issue and long as necessary.

“But it is only with the public’s help that can we keep making that a reality.”

Including the six vehicles seized while I was out with officers, in the last month alone police in Solihull borough have taken more than 30 bikes off the streets.

And whether a designated field or track is established to give off-road bikers somewhere to ride is an idea mooted in the future, police action against illegal off-roaders is good news for the Solihull residents tired of being keep awake by the sound of petrol engines.