Poems and songs as Joyce marks her 100th birthday in style

A SUNRISE of Solihull resident has celebrated her 100th birthday.

To mark the event, on August 7, Joyce was treated to a small party that included a buffet provided by the care home’s catering team, and wellwishers were treated to poems she had written in her 80s and popular songs from the 1940s performed by singer David Knowles. Joyce also took the lead on many of these activities. 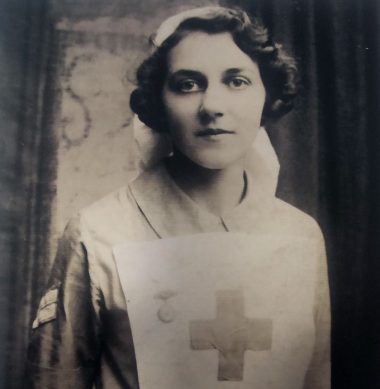 Joyce in her days as a Red Cross nurse.

Alongside this, she received 50 cards from family and friends, including one from the Queen, as well as a huge selection of flowers.

Born in Yorkshire weighing just 5lbs, at the age of 14 she spent time in hospital with a heart condition and was told not to do sports or swimming when she eventually returned to school.

Yet, despite these early challenges, Joyce has gone on to enjoy an incredible life.

Throughout the Second World War she worked in The Royal Army Pay Corps and as a voluntary Red Cross Nurse, during which time she also met and married her husband Norman in 1942.

After the war, she and her husband spent 30 happy years in Surrey, where they had two sons.

During this time, she also worked for the then Liberal Party, before moving back to North Yorkshire.

Here, she became a leading figure in her local community.

Joyce then moved into Sunrise of Solihull almost 10 years ago with her late husband Norman.

Reflecting on an enjoyable day, she said: “It has been fantastic! There are so many flowers, it looks like a florist shop!”

Joyce’s son, Ian, added: “Pretty good going for a tiny baby and a child with a dicky heart.”

When asked by her grandchildren what advice she would give for reaching such an impressive age, Joyce noted: “Having children, who were a gift from God.”