Personal bests and more at inaugural Solihull half marathon

LAST Sunday close to 1,300 runners congregate in Solihull town centre for the inaugural Solihull Half Marathon and 10k.

Kyle Smith from Push The Beat led two warm-up routines for runners, preparing them for the mixed terrain course out to via Bentley Heath, Eastcote, Barston and Knowle along a route of rarely closed roads.

Organised by Run Through, the event village opened at 7.30am where charity partners Macmillan were collecting donations.

And the event obviously inspired the runners themselves with a substantial volume of personal bests being recorded as they crossed the finishing line.

Many of the runners also took advantage of pre and post-event massages to ease their aching muscles and relieve tension. 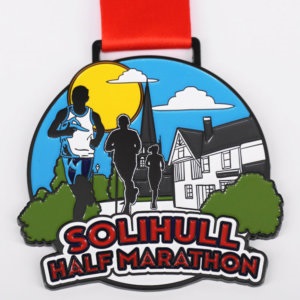 Kyle said: “This week’s event in Solihull was sensational.

“Seeing so many people having fun doing what they love with a smile on their faces was priceless.

“Now that mass events are permitted, we continue to appreciate the celebration of fitness, running, and community.

“The energy in Mell Square on Sunday was palpable.

“After such a successful initial event. Push The Beat are delighted to be invited back for next year’s Solihull Half Marathon.”

One definite bonus was the benefit of all those massages – one runner before the race saying: “The massage was perfect, it’s loosened me up, and I’m ready for the race.”

All warm-up activities were carefully sequenced to music to help uplift runners, motivate them before the race, and prepare their bodies for the 13.1 miles ahead.

Kyle said: “We’d like to thank all of the event team who volunteered their time to support runners – Barrington Francis, Lorna Wyatt, Patrick Folan, and Emma Patterson.”

First home in the half marathon was Jason Bennett with a time of one hour, 12 minutes and 25 seconds, followed by Ludovic Renou in 1.12.43 and Jim Hickinbottom in 1.13.07.

To get involved in Push The Beat outdoor workouts in Solihull, visit www.pushthebeat.co.uk