Meningitis activist stops off in Solihull on 344 mile fundraising walk

A CHARITY founder put his best foot forward and walked 344-miles from Gloucestershire to Northumberland in just 16 days to mark the 30th anniversary of Meningitis Now.

Steve Dayman, 68, set up the meningitis charity shortly after his 14-month-old son, Spencer, lost his brief battle with bacterial meningitis in 1982.

Desperate to find a cure, he has spent the last 30 years walking the length and breadth of Britain to raise vital funds – and has raised an outstanding £2million so far.

Now on his 33rd walk, Steve set off on his long journey from Morpeth, Northumberland to Stonehouse, Gloucestershire – covering a tremendous 20 miles a day. 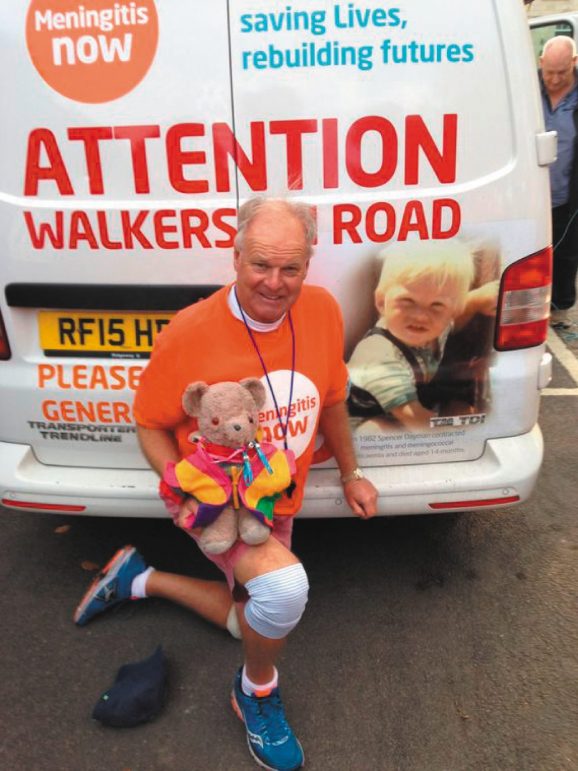 Sonny, a teddy bear belonging to his 14-month-old son Spencer who lost his battle with the disease, joined Steve Dayman on his walk.

On the last stretch of his journey, he stopped off in the borough and received a very warm welcome from Mayor of Solihull, Mike Robinson who also put in a few steps for the cause.

After stretching his legs at the Olton Tavern, he was joined by two local campaigners, Angela Cloke and Teresa Bateman, who have both had family members affected by the life-limiting disease.

After a boost in morale, he stepped back on the road and headed into Dorridge to meet The Natural Care Company and join the children on a sponsored ‘Toddle Waddle’ walk around the grounds.

Pulling out all the stops, he reached his final destination in Northumberland and smashed his £50,000 fundraising target.

Speaking after completing the walk, Steve said: “I’ve been involved with the meningitis movement for over 33 years as there were no organisations to represent the disease then.

“I’ve dedicated my life to help create better understanding of the disease and since then have funded over £12 million of preventative research and supported thousands of families whose lives have been devastated by meningitis.”