A REFORMED criminal is reaching out to detainees from ‘beyond the cell wall’ in an innovative behavioural science project aimed at cutting crime and reoffending rates.

The force is working with a team of psychologists and academics on trials aimed at ‘nudging’ members of the public to behave in ways designed to cut crime, support recruitment drives and improve efficiency.

One of the initiatives has seen an ex-offender − a man with a string of convictions in his youth for drug and fraud offences − pen words of advice to people who find themselves locked up in a West Midlands Police cell.

The message, hand written on the cell wall in black marker, tells how he broke free from a life of crime and how ‘it’s never too late’ for others to follow his example.

It reads: “When I was sitting here, I thought I’d keep coming back… it was just meant to be that way.

“We do things for all sorts of reasons: because mates did it, we got angry, it felt good, or we just didn’t think. But when I was last here I realised what I do is my choice and it’s time I chose something else.

“When I left I said I’d do things differently. It took effort but it paid off. The first step is the hardest so make it a small one.” 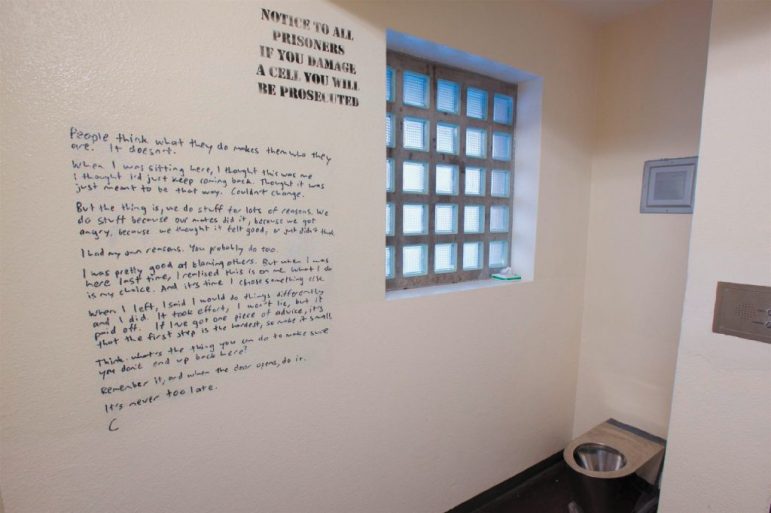 The message from a reformed criminal to those in custody. (s)

West Midlands Police and Behavioural Insights − a unit that started life as part of the Cabinet Office − will now analyse reoffending rates among detainees put in cells featuring the graffiti guidance compared to those held in ‘standard’ cells.

Chief Superintendent Alex Murray, said: “Suspects spend their time staring at a blank cell wall; there must be a better way of using that time and this messaging will be tested to see if it makes a difference.

“If not we’ll try something else most initiatives are now tested for proof of their effectiveness in what’s termed ‘evidence-based policing’.

“We want to use taxpayers’ money in a way that maximises the reduction of crime − and these trials have not cost West Midlands Police a penny as the work has been funded through a charitable grant.

“Preventing crime from happening in the first place − not simply reacting to offences and catching criminals − is central to our Next Generation Local Policing plan.

“Managing offenders and working with our partners in housing, health and social services to break habitual criminality is crucial. This work supplements that drive and if we can ‘nudge’ people into changing behaviours and reduce re-offending then it has to be embraced.

“Small changes alone may not make a huge difference but the cumulative effect of many nudges can mean less victims of crime and that is what West Midlands Police is all about.

“It’s a two-way process: we are putting issues to the Behavioural Insights and challenging them to identify trials that could help and vice versa they are suggesting ‘nudges’ with potential community safety and efficiency benefits.

“The trials range from innovative projects like the cell wall graffiti to simply changing a few words and the style on standard letters.”

‘Nudging’ is the notion that subtle suggestions can significantly alter decision making and have dramatic, positive effects on behaviour.

Up to three in ten of all reported phone thefts are thought to be false as people seek pay-outs for lost or damaged handsets.

It’s hoped the new nudge tactic will see a drop in the number of dodgy claims and free up call handlers and officers to help people in genuine need of police support.

Behavioural Insights has also helped the force redesign speeding fine letters sent to drivers with a fresh focus on the potentially devastating consequences of breaking the limit.

The trial Notices of Intended Prosecution feature an image of a crash scene flower tribute, statistics highlighting the number of child deaths due to speeding, and the headline “no driver means to kill… they were just going too fast.”

Results revealed an increase in the number of offenders paying the fine (up 13.6 per cent) − and a 41 per cent reduction in the likelihood of someone being taken to court for failing to respond − while fines issued with the additional literature were also paid more swiftly.

Encouraging victims and witnesses to attend court is the objective of another trial.

Simon Ruda from the Behavioural Insights Team, said: “West Midlands Police is leading the way in UK policing in the field of behavioural science; they have a strong commitment to innovative approaches to policing and understanding what works.

“We are trialling a wide range of interventions with West Midlands Police to assess the potential for rapid, practical, low-cost, behaviourally-informed interventions to reduce crime and aid police work.”

Solihull, Knowle and Dorridge set to get new supermarkets as Aldi unveils areas for another 100 stores