LONG-MOOTED plans to transform the centre of Kingshurst have been granted outline planning permission by the borough.

Councillors on the Solihull planning committee voted on Wednesday (September 16) to give the go-ahead to the regeneration of Kingshurst village centre, which will see the 1960s shopping parade razed to build social housing.

A new parade of shops will be built between Kingshurst Primary School and St Barnabas church.

Councillors gave unanimous backing to the masterplan, which includes 86 new houses, 34 of which will be for rent from Solihull Community Housing.

A new Kinghurst Boulevard will link the east and west of the village through the its centre.

The council also intends to build new doctors and dentists surgeries on the site.

Planning officer Kim Allen said: “There are currently 22 units in the village which are affordable housing. In this scheme that number reaches 34, and in terms of what type of affordable housing these will be, all those units will be put over to social rent.” 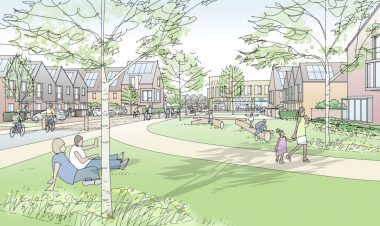 In a statement, a spokeswoman for Solihull Council said: “As the final local centre set for regeneration in North Solihull, the Kingshurst plans aim to build on the success of previous schemes at Chelmund’s Cross and Smith’s Wood to transform the area by radically redesigning the village centre.

“The new centre will offer high standard modern family housing along with a range of local services, amenities and healthcare provision.

“The community will continue to be involved and have their say on these plans, playing a significant role in helping to finalise the details of layout and appearance of the development as the project progresses to the next phase.”

Coun David Cole, ward member for Kingshurst, said: “This is really welcome – it looks a good plan, there is a lot more to discuss but the residents have been fully briefed on this, with well attended meetings in the library.

“This town centre development is years overdue. The area is rundown and past its sell by date. We do want it to happen.

“All of a sudden we can blow the whistle and get it going.”

Coun Ian Courts, leader of Solihull Council said: “Another key milestone has been passed with the approval of this planning application and I know just how much work has gone into getting it this far.

“The Outline Planning Application is by no means the final blueprint for the site but it does clearly mark out the principles of the redevelopment. It also confirms the planned access to the site and is a vital next step in supporting the process to acquire all of the land we need to build the new centre.”