Could YOU be a puppy walker for the Star Wars police pups?

THE FORCE is strong with the latest litter of West Midlands Police pups, who have all been named after Star Wars characters.

The nine-strong ‘Star Paws’ litter of German shepherd pups were born in December last year and are now old enough to leave their mother and start socialising.

Now the WMP Dog Training Centre is on the hunt for members of the public who want to join the ‘bark’ side and volunteer as puppy walkers for Luke, Bibi, Saber, Jabba, Darth, Binx, Vader, Rey and Trooper.

Previously police dogs had been named alphabetically – with each litter having named beginning with the same letter. 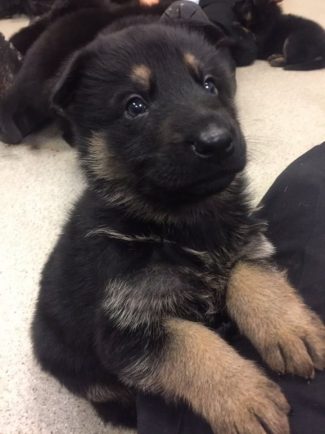 But having bred more than 1,000 police pups, breed scheme manager Dave Raymond said he and centre staff had begun to run out of ideas for names.

He said: “We had started to scratch our heads when it came to naming our litters until someone suggested we name them after films or television shows.

“And as the new Star Wars film had just come out when they were born, we decided to name them after that.

“We hoped it would help attract people’s attention and encourage them to sign up to become puppy walkers.

“But we were not quite prepared for the number of people that would apply – in just one night we had hundreds of applications.”

Dave anticipates future litters will be named after characters from Dad’s Army, Game of Thrones, Harry Potter and Disney.

Fully vetted puppy walkers are responsible for homing the puppy, caring for its needs and crucially, helping them to socialise with people and other dogs.

At six months old, the puppies go through to the crucial six month assessment stage of their training back at the Dog Unit in Balsall Common to see if they have what it takes to become fully operational, effective police dogs.

If successful, they return to their puppy walkers for another few months before undergoing the final assessment stage and being assigned to a police handler ready to begin serious training.

Anybody over 18 can apply to be a puppy walker, if they have the time to look after the puppy and provide plenty of play time to allow it to develop within a happy, carefree environment.

Puppy walkers need to live within the West Midlands or on the very outskirts.

Email the breedscheme@west-midlands.pnn.police.uk to register interest.

The ‘Star Paws’ pups will also be at Crufts this year for dog lovers to meet.