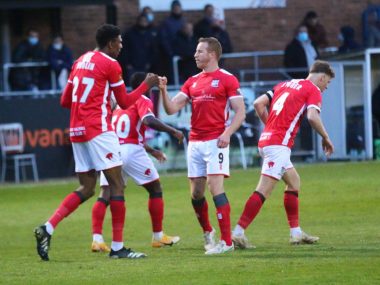 MARK Yates has challenged his Solihull Moors side to bring the curtain down on their 2020/21 National League campaign, and maintain the club’s recent unbeaten home record, when taking on Eastleigh in Saturday’s season finale.

An early second-half goal from Adam Rooney secured a point on the road for Moors at strugglers King’s Lynn Town, who took a 30th-minute lead through Ross Barrows, to make it six games unbeaten.

With the chance to make it ten home games without defeat at the SportNation.bet Stadium this weekend, the 51-year-old wants to bow out from his successful second coming in Solihull in style before he returns to parent club Stourbridge next season.

“We’ve got one game to go, we’re not where the club wanted to be,” Yates said.

“So we’ve got to get the season out of the way this Saturday in front of our home fans – give them something to cheer about, hope and cling onto for next season – and go from there.”

As far as the midweek encounter went for Moors, it was a case of plugging away in terms of finding an equaliser after King’s Lynn struck the opener against the run of play, in a performance that left the Solihull manager with plenty of encouragement despite failing to secure all three points.

“They were up for it, with supporters back in getting behind them,” Yates continued.

“We switched off from a set-piece and didn’t deal with Michael Gash as effectively as we would’ve liked, and just didn’t play with the same fluidity as we did last time out and previously.

“The lads have been absolutely brilliant for me, and I’m really pleased with the effort that they’ve given us for 18 games now.

“It’s a point on the road – it’s not what we wanted – but you’ve got to give the opposition credit sometimes, they were buoyed by their fans and didn’t stop running.

“They made us run around and compete, that’s what you’ve got to do, we weren’t our usual self though.

“But the lads were superb in terms of their effort, we just couldn’t dominate the ball in the way that we wanted to.

“I thank every one of them for their efforts so far.” 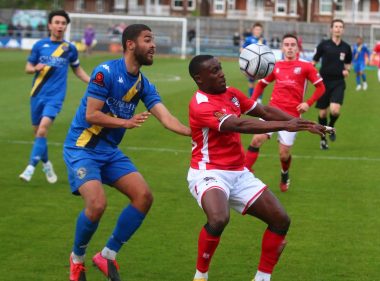 Alex Addai, right, controls the ball on his chest. Pictures by Richard King.

With an unchanged line-up from the side that swept aside Wealdstone 4-1 last weekend, Moors set out the traps looking to snatch an early lead – something which Alex Addai looked to provide with a sumptuous ball across the penalty area that was begging to be finished.

King’s Lynn had other ideas though, going in front through Barrows flicked header towards goal that left Ryan Boot powerless.

Kyle Storer should have done better when launching himself at a Jordan Cranston free-kick and failing to place the ball either side of Linnets ‘keeper Theo Richardson, as the scoreline remained the same at the break.

And though Simeon Jackson clipped the outside of Solihull’s post, Rooney was on hand to provide an equaliser after dispatching from Addai’s whipped centre.