Put in, the Bears totalled 156 for four, considerably fewer than looked likely when they were 103 for one after 12 overs.

The fall of Ian Bell – who hit 50 from just 35 balls – sent the innings into decline against an accurate attack led by South African spinner Tabraiz Shamsi (24/2) and seamer Richard Gleeson (20/0).

A further blow befell the Bears when a Gleeson delivery rapped Rikki Clarke on the right thumb, forcing him to retire hurt and leaving him unable to open the bowling.

In Clarke’s absence, the Steelbacks charged to 40 runs from three overs as Adam Rossington’s ferocious 20-ball 34 set them on the way.

Josh Cobb then took up the cudgels with a well-judged 48 and Rob Keogh (41*) saw them over the line with a boundary off the final ball.

Birmingham skipper Ian Bell said: “It was another great game and we were on the right end of one the other day but not today.

“We weren’t quite at our best today.

“We were probably 20 short with the bat.

“It didn’t help us to be a bowler down, a guy who regularly bowls four overs for us, but I was delighted with the way we scrapped with Aaron Thomason and all the guys chipping in.

“We did well to take it right to the last ball and the beauty of T20 is there’s usually a chance to bounce straight back and that’s what we’ll be looking to do against Leicestershire Foxes on Sunday.”

BIRMINGHAM Bears were dealt another loss on Sunday afternoon at Edgbaston as Leicestershire Foxes continued their winning start to the Natwest T20 series with a nine-run win.

At 72 for one in the eighth over, they seemed set for a tall score – but the last 12 overs brought 75 for eight.

It was a modest total but one they defended with great skill, restricting the Bears to 138 for eight.

Clint McKay, fresh from a Foxes T20-best five for 11 against Worcestershire Rapids on Friday, denied the Bears a flying start with two overs for 11 runs and then the pressure was maintained by Colin Ackermann (21/3), Cameron Delport (14-1), and Mathew Pillans (23-1). 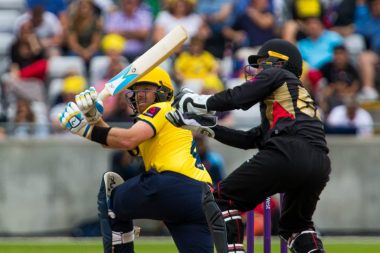 “We did well to claw it back after they had a lightning fast start and at halfway we felt we really had a big chance but didn’t get the second half right.

“I think it was our third game on that wicket so it was a little bit slow and they learned from the way we bowled and took a little bit of pace off the ball and made it pretty hard for our batters.”