CRICKET: A STAR century from wicketkeeper Matthew James helped Hampton and Solihull edge to a fine margin two wicket victory over Coleshill at the weekend.

The win lifted Hampton and Solihull above Coleshill to ninth place in the Warwickshire Cricket League Premier Division, 49 points clear of bottom side Highway Spartans.

Sensing an opportunity to skittle the visiting side out for a cheap total, Hampton and Solihull set about removing Coleshill’s middle order for similar figures.

However they were denied by the patience and intelligence of Kamlesh Kadam and opener Muhammed Fahim who hit 87 and 44 respectively to help guide Coleshill past the three figure mark.

Coleshill skipper Sunny Ahmed chipped in with 26 while tailenders Azim Riaz and Abbas Naeem reached double figure scores to help Coleshill achieve 218 all out in 49.4 overs, slightly below par given the conditions presented to them. 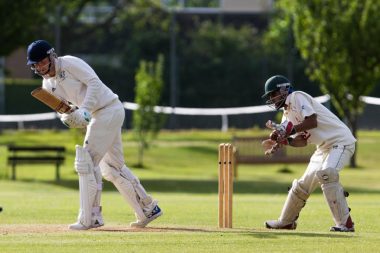 In reply, Mark James was bowled by Sunny Ahmed early on for just four runs while fellow opener couldn’t add to his promising first 20 runs as he was caught off the bowling of Muhammed Naeem.

This brought Johangir Khan and Matthew James together.

While Khan hit a solid 40, it was James’ innings of 102 which guided the home side to victory as he hit almost half of the runs required single handedly before he was bowled by Abbas Naeem.

A late order collapse made James’ knock even more crucial as it was left to Tim Keyte and Faisal Iqbal to hit the winning runs with just over three overs remaining.

There were positives to take from the game for Coleshill though as Abbas Naeem took five wickets for just 30 runs from nine overs.

Hampton and Solihull picked up 20 points for their efforts.