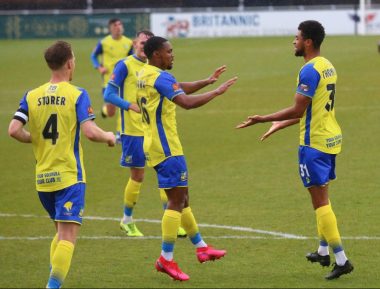 ASSISTANT manager Neil Howarth has lauded the presence of strong competition within the ranks at Solihull Moors, after a much-changed side tore apart Altrincham 4-0 on Bank Holiday Monday.

The Moors started with five fresh faces from the side that were downed 2-1 by Wrexham on Saturday, and showed real resilience to get back on track and continue the club’s impressive record of five wins in the six home games since Mark Yates’ return to the SportNation.bet Stadium.

While the final scoreline will no doubt have been easy on the eye, Howarth was keen to re-iterate the reality of the task at hand for Moors against an Altrincham side that have been adept on their travels this term.

“We knew it was going to be difficult, Altrincham on their day can pick up some really good results and their away form has been better than at home,” said the 49-year-old.

“We’re both coming in off the back of a busy weekend and a tough game on Saturday, so physically and mentally we had to prepare right and it was very pleasing to get a good win.

“We were in control of the game still, but they hit the post and the bar in the first half.

“In the second half we had the wind in our favour, which helped us a little bit, we were able to play through the thirds more.

“It looked a comfortable afternoon, but credit to Altrincham because they had their moments.”

With Moors making some half-time adjustments, a first appearance in the back-four for midfielder James Ball proved a masterstroke of sorts, as the hosts benefitted from the 25-year-old’s stature and previous defensive experience to claim their 11th league clean sheet.

“We had to tweak things, and James has played there a lot in his early career at Bolton Wanderers, it’s not something he’s done for a while, but he’s shown he can do it in the past,” Howarth added.

“It’s a different mindset, you have to think like a defender sometimes – as much as he’s good on the ball – he looked so comfortable there in the second half.

“We’ve had two games in three days, we’ve got a big squad and with players coming back from injuries, we’ve said to lads that there are always players trying to take their shirt.

“It’s good to have competition, it’s not something we’ve had much of this season with the treatment room being full.” 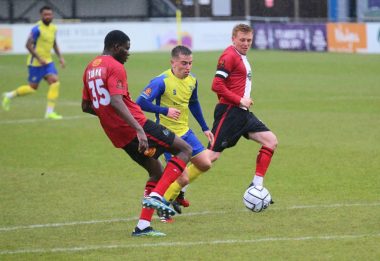 Joe Sbarra, centre, in the thick of the action. Pictures by Richard King.

Callum Maycock, Kyle Hudlin, Jordan Piggott, Joe Sbarra and Ben Usher-Shipway all stepped into the starting XI as Moors made use of their squad depth, hoping to get back on track after two successive defeats prior to kick-off.

It was an opening period that featured plenty of chances for both sides, a Hudlin stab towards goal unable to give Moors the lead after a pinpoint delivery from James Ball, while Yusifu Ceesay clattered the post with a powerful strike down the other end.

Justin Donawa could and perhaps should have added his fourth Solihull goal when meeting a Jordan Cranston delivery with a header that lacked conviction, before seeing a strike cleared off the line by Toby Mullarkey.

A breakthrough ultimately did arrive, despite the Robins’ Sean Williams cracking the Moors woodwork for the second time, as home debutant Jordon Thompson bundled the ball home from a corner on 38 minutes.

An own-goal 12 minutes after the restart doubled the hosts’ lead when Shaun Densmore mistimed a header and picked out the back of his own net from Kyle Storer’s free-kick.

From there, Moors reinforced their stronghold of the game, going three goals to the good through Hudlin.

The towering striker took advantage of Altrincham shot-stopper Matthew Gould being misplaced and, after receiving the ball from Sbarra, fired home in the 66th minute.

Then, with a minute remaining, substitute Cameron Archer put the icing on the cake, curling a sumptuous effort into the postage stamp to seal an emphatic win.