FOOTBALL: IT PROVED to be a game of two halves on Saturday as Solihull Moors looked on course to recording one of the biggest FA Cup shocks in recent years as they led Luton Town 2-0 on Saturday, but six second half goals from the hosts ended any hopes of a giant killing at the Kenilworth Road Stadium.

Over 600 Moors fans made the trip to Luton as Liam McDonald’s side prepared for the biggest day in the club’s history.

It was the furthest Moors had ever progressed in the competition having knocked out Yeovil Town in the previous round and they made the perfect start by taking the lead with six minutes on the clock.

Connor Franklin collected the ball in Moors half and having marauded up the left wing he found Jamey Osborne in a tightly packed box – without a moment’s hesitation he chipped the ball into the top corner of the net with keeper Walton rooted to the spot.

On 14 minutes Hylton burst down the right before laying on a perfect pass to Marriott but his well struck effort from inside the six yard box was headed away by Jordan Gough.

Akwasi Asante was thwarted by Walton from point blank range but when the ball was picked up by Omari Sterling James he hit it straight at the keeper from 20 yards. Hylton had the ball in the Solihull net on 23 minutes but it was clearly off side.

With half an hour played Sterling James was floored and Liam Daly was unlucky to see his nod down from Jack Byrne’s free kick scrambled away by the keeper.

On 35 minutes Moors were on cloud nine as Murombedzi’s cross was nodded back to Osborne and he was completely unmarked to drive a low shot from the edge of the box into the bottom left hand corner to put the visitors 2-0 in front. 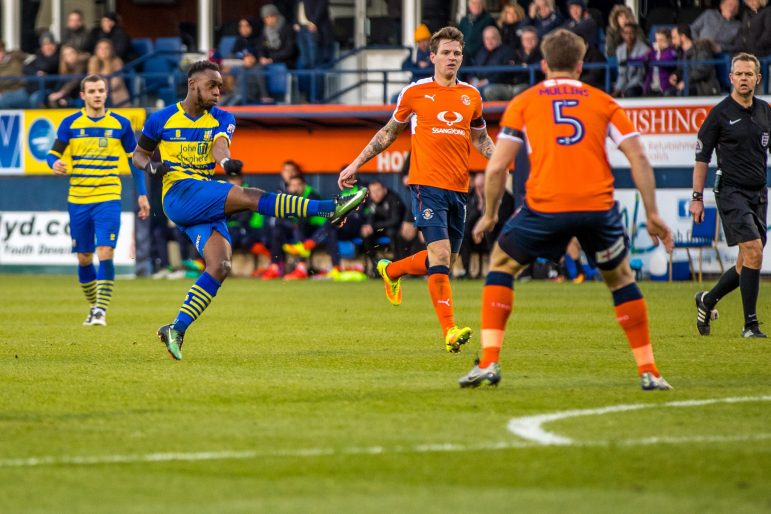 Asante’s header was close after Eddie Jones had nutmegged his defender before crossing and Sterling James went wide from 25 yards as Moors pushed for a third and Asante came close again shortly before half-time but his shot hit the side netting.

Luton were quick out of the blocks after the break with Sheehan forcing a great reaction save from Lewis but on 51 minutes they pulled one goal back as Marriott picked out Hylton who beat Lewis from close range.

Moors desperately needed to stem the tide and hang on to their precious lead but three minutes later they were undone again as Mullins curled an 18 yard shot into the corner of the net.

The hatters were rampant now and on the hour mark they took the lead. It was Marriott again this time finding substitute O’Donnell who powered a low shot into the corner of the net to make it 3-2 to the home side.

Three minutes later Luton took advantage of some hesitancy in the Moors defence as they broke from a Moors attack. Marriott avoided the offside trap as he raced onto a Hylton pass before beating Lewis who could do nothing but watch the fourth goal nestle into the back of the net.

Charlie Morris made his senior debut for the limping Franklin on 72 minutes before Lewis was in action again diving low to halt Marriott and again a minute later saving at the near post.

McDonald made a double substitution with just under ten minutes left on the clock with Eddie Jones and Sterling James being introduced but it was more damage limitation now for Moors.

In the final minute of normal time O’Donnell doubled his tally when he hammered a low shot inside the upright and the rout was completed in the second minute of added time when Marriott slammed home from the edge of the box for number six.