CYCLING: A PAIR of Team GB road stars from Solihull Cycling Club stars are encouraging budding cyclists to get into the sport’s most unique format.

Lucy Shaw and Jake Stewart both learnt their racing craft by using cyclocross as a stepping stone to riding for Team GB at the European Road Race Championships.

The format requires riders to quickly dismount and carry their bike while navigating multiple obstructions, which can vary from steps, hurdles, or logs.

Belgium, Netherlands, and France are particularly strong at cyclocross, however Team GB’s Under 18s team scooped all three podium spots at this year’s championships.

And now both Shaw and Stewart are encouraging youngsters to join the latest pedal powered trend as Solihull Cycling Club prepare for the new season.

Shaw, who has just returned from representing Team GB in the European Road Race Championships in Denmark, has raced for professional women’s team DROPS for two years.

She first started cyclocross at the age of ten and competed for several seasons.

“Being exposed to this kind of racing helps you develop excellent bike handling skills.

“Since racing in the professional peloton I have found the skills I picked up at a young age have really helped my confidence in moving up to the front in 150 rider strong pelotons and tackling technical narrow finishes.

“It also gave me perseverance and made me a tougher bike rider and prepared me for the Belgian spring.” 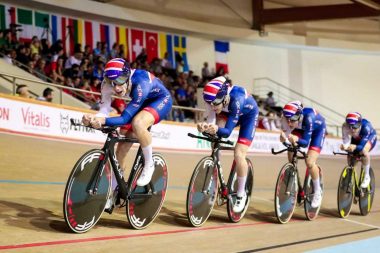 Meanwhile 17-year-old Jake Stewart has just scooped a silver medal for Team GB at the European Championships in Team Pursuit.

Stewart raced cyclocross for six seasons, competing from the age of 11, and said his love for the format grew as he competed more.

He said: “I think the reason I enjoyed it so much is often you werent actually aware of what position you was in.

“I enjoyed this early on as it meant that I didn’t get hung up on results, all I had to do was ride my bike as hard as I could and ride everything as technically well as I could.

“It is a nice variation from road riding in the summer and training through the winter. It broke up my season and meant that I wasn’t ever bored of just riding on the road.”

900 riders have registered to take part in the league which is now one of the biggest in the country – and up to 40 Solihull riders will be taking part.

Training for the cyclocross season takes place every Tuesday and Thursday evening at Tudor Grange.

Shan hopes for successful “marriage” with the Moors