Sky the limit for Solihull - but Moors must keep building momentum, says Shan 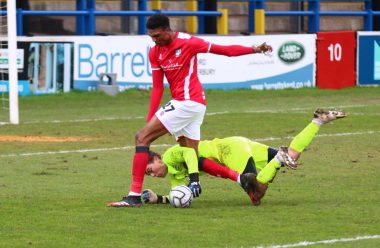 Kyle Hudlin is denied at the feet of Oliver Webber. Pictures: Richard King.

JIMMY Shan tips a positive season ahead for Solihull Moors – as long as his side perform to their maximum potential.

A 2-0 victory over the National League’s basement side Dover Athletic – thanks to goals from Nathan Cameron and Kyle Hudlin either side of the break – pushed Moors up to seventh and back into the play-off places last weekend.

And with several games in hand on the sides above them, prior to tomorrow night’s crunch clash with promotion rivals Notts County, there is a real chance for Solihull to knuckle down and launch their latest promotion push with no other cup commitments facing them.

“We have to keep building, we built on a solid performance against Aldershot in the week – albeit the result – but I know that with this group of players, if we can perform the way that we do and can at times, we’ll have a successful season and will be hard to beat,” said Shan.

“We spoke before the game about some of the things that we’ve produced this season, we’ve produced some good performances in possession, clean sheets.

“It’s something we need to fall back on and take positives from.

“I was really pleased with the performance in difficult conditions. After four or five minutes, players were losing their footing and slipping, the play slowed down at times when we were moving the ball.

“But when we had that trust and composure I thought we played some very good football in spells.

“To coincide that, I thought we looked very good defensively too.”

Newport County loanee Howkins made his first start for Moors at the Crabble Stadium, one of three changes alongside Jamie Ward and Callum Maycock. 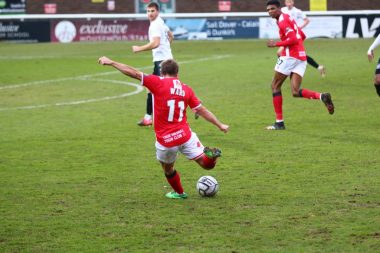 Impressing on his debut for the club alongside another recent arrival in Cameron, it was the latter who gave the visitors the breakthrough on the stroke of the half-hour mark – flicking in Ward’s corner after beating Dover ‘keeper Oliver Webber to the ball.

Hudlin almost doubled the lead for a Solihull side that were evidently buoyed by notching the opening goal, twice denied by the home shot-stopper in quick succession after good link-up with Ward and James Ball.

Going into half-time with the scoreline still the same, Moors showed the same positive approach and were rewarded just seven minutes after the interval when Hudlin made it three goals in three games – and his sixth for the club – scampering the ball home after Ward’s cross deflected perfectly into his path.

There was almost a second for the 20-year-old striker after firing goalwards, but his shot failed to make its way through the crowd of Dover players that were well-placed in front of him.

An introduction for Adam Rooney from the bench was a welcome sight for Moors fans in the final 20 minutes of the game, one which they hope will be a sign of more things to come from the Irishman – who has only featured sporadically since signing in March last year due to injury.

While the Whites did offer some resistance late on, their threat was minimal to Ryan Boot’s goal, meaning Solihull ran out comfortable winners. 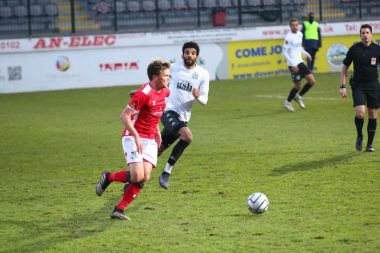 As far as individual showings were concerned, Shan was pleased with the impacts of goalscorer Hudlin – and the new defensive partnership of Howkins and Cameron.

Speaking on Hudlin’s finish, the Moors manager praised the concentration of the hitman inside the Dover penalty area, and said: “He probably should have scored on his first contact, but he stayed in and around it and made it count with his second contact.

“The goal came in a spell when we started to dominate, control and start to open them up.

“The recruitment of Kyle and Nathan have added some real physical steel, I thought they dominated their first contacts throughout.”

While a waterlogged pitch will deny Moors from playing host to Notts County in midweek – in a fixture moved to Meadow Lane a day later than originally planned – Shan’s side will finally return to home soil against bottom-half side Wealdstone on Saturday.

FOOTBALL – Moors drop out of play-offs after defeat at Bromley