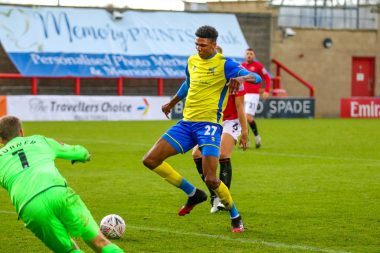 MANAGER Jimmy Shan has heaped praise on the resilient nature of his Solihull Moors side – who were hampered in their preparations for Sunday’s FA Cup second round defeat to Morecambe due to a COVID-19 case two weeks prior – despite going down to a 4-2 loss at the Mazuma Stadium.

Moors had been out of action since a 2-0 win at Altrincham on November 11 after one first-team member tested positive for the coronavirus, forcing a two-week self isolation period for the entire team which ultimately restricted their preparation to a couple of training days in the run-up to their battle with the League Two Shrimps.

In the topsy-turvy affair, Solihull took the lead through Kyle Hudlin on 19 minutes prior to a quickfire two-goal salvo from the hosts’ Cole Stockton just before the hour mark.

Jordan Cranston netted a fine goal on the breakaway with just over 20 minutes to play to force the additional half-hour of extra time, only for Shan’s men to go down to John O’Sullivan’s header and a Mitch Hancox own goal.

For the Moors boss, while the defeat was a sickener to take given the circumstances, it was a show of mental strength that suggests his side are up for the rigours of a long National League season.

“I think the longer the tie went on, the more difficult it was for us having not prepared over the last two weeks in a physical capacity,” Shan said – in reference to the club’s enforced break from play.

“I thought for the first 30 minutes we were excellent. I thought we gained control, were dominant and deserved the lead. Looking back at it we could have been two or three up had we been more clinical in the final third.

“I think in the last 15 minutes of the first half we allowed them back in the game, the game was open in transition and we thought we could hurt them on the turnover.

“There were times where we were searching for that instead of playing carefully and being a bit more patient.

“We have to give the players a hell of a lot of credit. They’ve spent two weeks locked in the house with a lack of opportunity to get in the open air and keep their fitness through road runs – that was taken away from them.

“It was always going to be a difficult task but I have to applaud their mentality, their character and their resilience – they’re a brilliant group.

“To have two weeks off, two days training beforehand and to compete for 120 minutes, I bow my head to them.” 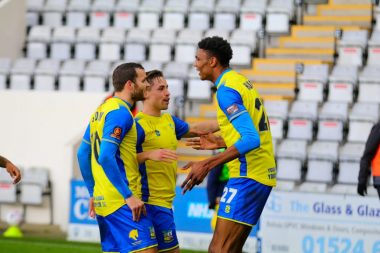 Solihull’s early endeavour in the cup clash was rewarded when Morecambe ‘keeper Jake Turner parried away Jordan Cranston’s ambitious effort from range into the path of the onrushing Hudlin – who made no mistake with the finish.

The visitors were not done there, and were unlucky not to double their advantage with a flurry of further chances in the first half.

Cranston almost had a goal to his name with a header that deflected against the Shrimps post and out, while Hudlin was inches away from a brace when he nudged an effort against the woodwork.

Despite holding the lead at the break, Moors’ advantage was wiped out eight minutes after the restart when Stockton lashed home clinically with a rasping volley into the far corner that left Ryan Boot rooted to the spot.

Then, a minute before the hour mark, the Morecambe striker doubled his tally when converting Adam Phillips’ cutback.

Not to be disheartened, the away side were back on terms when substitute Jordan Archer’s lung-busting run ended with a pass across the hosts’ penalty area which set up Cranston for a simple finish.

That was how it stayed until the full-time whistle, with plenty more drama to be witnessed in the extra-time period. 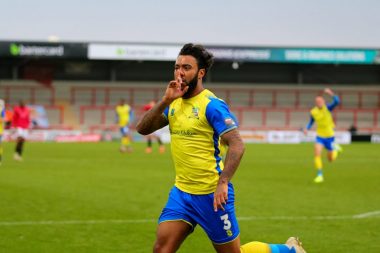 Unfortunately for Solihull, they were unable to keep the pace with their Football League opponents, going behind when John O’Sullivan flicked a header high into the air before nodding over Boot into the bottom corner on 95 minutes.

And when Mitch Hancox diverted into his own net from a Morecambe corner three minutes after the second period, that was effectively the tie done and dusted – despite late chances for James Ball and Kyle Storer to force a nervy finale.

Shan had plenty of words for one man in particular after the tie, singing the praises of Moors’ goalscorer Hudlin.

“We signed him for a reason and a purpose, we think we can develop him into a top-level centre forward,” said the Solihull manager.

“He’s obviously different to most at six-foot, nine inches. Normally, you associate players who are that tall as having loose technique and touch, but he’s the complete opposite of that.

“He’s got a mindset to want to improve day in, day out and we’ve seen that at his short spell at the club so far, so hopefully he can keep improving and keep making a name for himself.”

It is now a case of making up for lost time for those of a Moors persuasion, with the games set to come thick and fast – starting with Tuesday night’s home league game with Hartlepool.

FOOTBALL – Moors drop out of play-offs after defeat at Bromley