Sbarra deserving of the plaudits, says Ardley after Wrexham draw 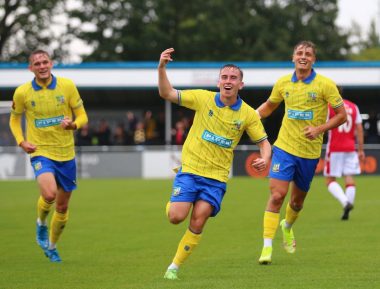 Joe Sbarra wheels away in celebration after his opening goal. Picture by Richard King.

Having given the SportNation.bet Stadium hosts an 18th-minute lead, high-profile signing and the 2020/21 League Two top-scorer Paul Mullin then levelled for the Red Dragons before David Jones sent the visitors in front on the half-hour mark.

With Moors throwing everything at their opponents, Sbarra popped up with a timely equaliser to share the spoils on the opening day of the new campaign.

Paying tribute to his side’s saviour, Ardley said: “He’s been outstanding all of pre-season, whatever system I’ve played or whatever position I’ve put him in he’s been lively and understood it, so he deserved that [brace] and deserves to be in the starting line-up.

“Sometimes when you get to the first day of the season the players can get a bit more nervous, the result counts and you forget to play and move the ball the way you had done [previously], but I thought we did that really well.

“We opened them up, got in great areas and looked like we could score every time we went forward whilst looking defensively solid against a team that everyone knows is going to be strong this year.”

Sbarra’s opener was a deserved one, with the midfielder popping a 20-yard drive into the top corner that left Christian Dibble powerless.

But then with a quickfire double from the visitors – Mullin’s penalty after being fouled, followed by Jones’ left-footed blast past debutant ‘keeper Marcus Dewhurst – the game was turned on its head in an instant.

While a lack of chances meant the Moors were up against it to take anything from the game, they finally found some substance right at the death, Sbarra burying the ball in the back of the net following a goalmouth scramble to make it a point apiece.

On Saturday, Barnet are the visitors – with the Bees suffering a 5-0 hammering on the opening day.

THE MEN’S team were not the only side to pick up a positive result last weekend, with Moors Women continuing their 100 percent start to FA Women’s National League Division One Midlands by seeing off Holwell Sports 3-1.

Lois Jefferies thrashed home a header from Jodie Price’s centre to give the league leaders the advantage, before Courtney Cropper picked out the top corner moments later.

But with Jefferies on hand to regain the lead a minute before the break, it was Moors who were back in the box seat for three points.

Jefferies would have had a hat-trick had it not been for the woodwork denying the forward’s dipping free-kick attempt, but with the ball instead falling to Kathryn Pagan, Solihull still managed to build a two-goal lead regardless.

After a midweek tussle with Boldmere St Michaels, Moors go to Lincoln City on Sunday.