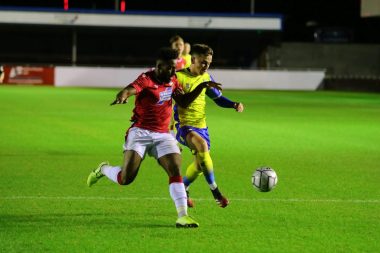 MANAGER Jimmy Shan was left beaming with pride after his resolute Solihull Moors side secured their first victory of the National League season against Wrexham on Tuesday night.

James Ball’s 56th-minute bullet header guided the Moors to a slender 1-0 victory to give their campaign lift off, having been subjected to a 2-1 comeback defeat against Woking in Saturday’s season opener.

While Shan still saw plenty of points for improvement from the maiden win, he was ultimately pleased to have beaten one of the main-stays of the division.

“We had to show bags of character and resilience, probably wasn’t one of the prettiest games tonight,” he said.

“I think both teams had opportunities to gain control, but other than that it was very scrappy – so I’m pleased with the boys’ character towards the end. 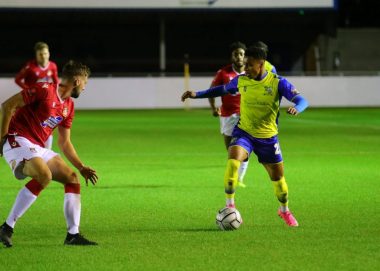 Cameron Archer takes on his man. Picture by Tom King.

“There are things we can look back and review and improve on, we had a couple of issues with their shape and how they were in the building in the first half.

“In the second half we didn’t rectify it – I would have liked us to have gained an extra five, ten yards higher up the pitch in order to gain some pressure and to have stopped those long, direct balls coming in our box frequently.”

And with fixtures now set to come thick and fast in the coming months as a result of the delayed start to the season, Shan can already see patterns to Solihull’s play beginning to develop.

“I’ve said to the boys that we’re working towards something and playing a certain way,” he added.

“But along the way you have to stand up for yourself and show resilience, defending directness. I come away this evening with lots of pride in how they stuck up to that.”

Two changes were made to the side that lost at the weekend, with loanee Cameron Archer and Darren Carter stepping in for the injured Jamie Ward and Cameron Coxe – who is on international duty with Wales under-21’s. 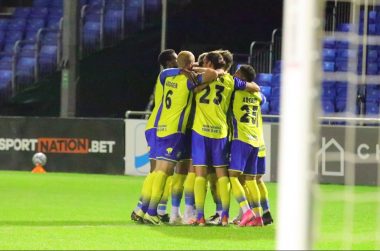 After early chances for Joe Sbarra and Ball went begging, Wrexham came close to opening the scoring when Jordan Davies’ long-range attempt forced Ryan Boot to tip onto the crossbar – sparking cries from the away side that the ball had crossed the line after it bounced down towards goal.

Paul Rutherford’s header rippled the side netting for the Red Dragons, as the Welsh side enjoyed a strong spell towards the end of the first half.

In the end, it was a second-half header from Ball which decided the game, following a pinpoint cross from left-back Jordan Cranston.

Boot and Carter were called into action to deny ex-Moors man Kwame Thomas and Rutherford as the visitors stepped up the pressure.

Archer almost settled the contest with a header that glanced just wide, but Solihull did enough to see the game through with their stern approach to defending. 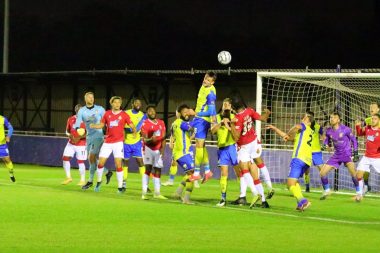 In Saturday’s loss, it was new boy Ward who gave Shan’s men an 18th-minute lead from the penalty spot at Kingfield Stadium after Coxe was fouled inside the penalty area.

A header from Max Kretzschmar eight minutes into the second half, followed by Kane Ferdinand’s winner on the hour mark, then changed the outcome of the game in Woking’s favour to deny Moors a winning start.

Another home game now follows against King’s Lynn Town on Saturday (3pm), before a trip to Altrincham on Tuesday night (7.45pm).