FOOTBALL: LIAM McDonald’s search for Solihull Moors’ first league win of the season continued on Saturday after his side lost out to FC Halifax Town at The Automated Technology Group Stadium.

A first half finish from Adam Morgan was enough to separate the sides in a game which also saw Oladapo Afolayan have a penalty saved.

Following a slow start to the game, the first chance fell to the visitors as Jordan Liburb misjudged a long ball forward before his short back pass allowed Morgan through on goal.

Morgan’s effort was saved by Nathan Vaughan though as Joel Kettle got back behind his ‘keeper to clear the follow-up off the line.

Moors went straight on the attack following the early scare though as Kristian Green found Kettle free in the box.

A glancing header from Kettle was tipped just wide by Sam Johnson in goal.

Moors skipper Darren Carter then latched onto a loose ball on the edge of the box before striking a deflected effort inches wide of the bottom right corner as Liam McDonald’s side looked for the breakthrough.

But it was the away side who took the lead just short of the half hour mark. 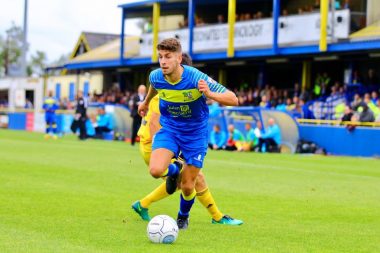 Some neat play from Matt Kosylo saw him skip past Shepherd Murombedzi before cutting back for Morgan who swept a low drive past Vaughan and into the net.

Moors struggled for any instant reply but almost levelled a couple of minutes before half-time.

A well threaded pass from Tahvon Campbell found the on-running Afolayan who hit a powerful effort that was well saved by Johnson.

Billy Heath’s team ended the first-half strongly and could well have entered the break two goals to the good when Tom Denton met a cross with a glancing header which went straight into the arms of Vaughan.

Solihull were handed a route back into the game at the start of the second half when Afolayan skipped his way into the Halifax penalty area before being tripped by a defender.

The Moors forward picked himself up before seeing his spot kick well saved by Johnson as the opportunity to equalise went begging.

Desperate to make amends, Afolayan failed to put a headed effort moments later on target as Halifax held onto their precious lead.

Carter then made a driving run before slotting Murombedzi through on goal, but he saw a deflected low shot go inches wide.

From the resulting corner, George Carline threw himself at the ball but headed powerfully over as Moors began to apply the pressure.

Time quickly ran out though as the Shaymen stood firm to hold on for the win.

Moors are next in action this Saturday, August 26, with an away trip to Torquay United.