FOOTBALL: HEAVY rain in the build-up to Solihull Moors’ National League clash against Macclesfield on Saturday proved not to be the only dampener as Liam McDonald’s men slipped to sixth league loss of the season.

Moors are now three points short of safety having won just two of their nine games and drawing one other – leaving them on seven points from nine fixtures.

Saturday’s match started with George Carline missing from the squad while Ben Fox, on loan from Burton Albion, made his debut for the Moors.

Macclesfield, members of the football league up until 2012, started the game with intent as Nathan Vaughan was forced in a couple of early saves – one coming from point-blank range.

But Town keeper Jalal was equal to the shot and the follow up strike from Tahvon Campbell. 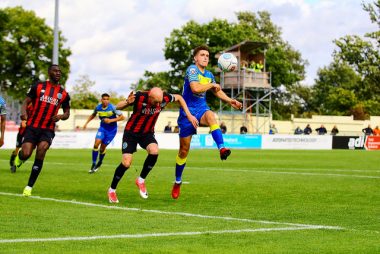 Macclesfield went close on the half hour mark when a corner delivered by Elliott Durrell fell loose in the box, but Town could only hit the side netting.

At the other end, Joel Kettle’s effort to hand Moors the lead went inches wide after Darren Carter delivered a free-kick into a dangerous area.

The Silkmen had to be on their guard throughout the opening moments of the second half as Afolayan went close from a tight angle before pressure eventually told when Moors were awarded a penalty.

Enjoying their best spell of the match, Moors continued to press as Daly sent a free-kick into the Macclesfield wall while Kalern Thomas rounded Jalal only to put effort from a tight angle wide.

With an hour played, Moors lost their grip on the game when Wilson passed a pair of Moors defenders before slotting the ball past Vaughan to hand the visitors the lead.

Moors weren’t short of their chances late on – Afolayan headered his effort straight into the hands of Jalal before Fox’s top corner strike was palmed away for a corner with minutes remaining.

Though four minutes were added on for injury time, McDonald’s men failed to find a winning goal.