Plenty of hope for Moors for remainder of season, says Yates 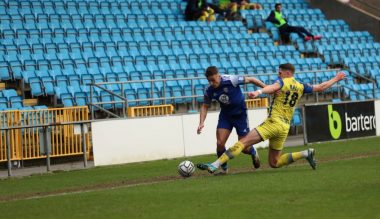 Moors were defeated 1-0 in the opening game of Yates’ second tenure at the club – a position he will hold until the end of the season after agreeing a deal with Solihull on a temporary basis from current employers Stourbridge – but produced enough chances to have won the game, eventually going down to Martin Woods’ 47th-minute penalty.

With a full week of training to fully prepare for their next outing away to ninth-placed Bromley on Saturday and adjust to the play style demanded by the new man in the Moors hot seat, who replaces Jimmy Shan after 13 months at the club, there is enough reason to believe that Solihull can slowly but surely begin to turn the tide and improve their current standing of 17th.

For Yates, the blueprint going forward was laid out in the loss to the Shaymen.

“I’m disappointed we’ve not won the game,” he said.

“The players were a little bit low, we asked them to do something, changed one or two things and they did exactly as they were asked.

“There’s things we need to continually keep working on, we need to improve our quality into the box, I’d like to have created a few more clear-cut chances, but we hit the bar, hit the post, we had one cleared off the line – we created chances.

“I said to them if they perform like that for the rest of the season, we’ll start climbing the table very soon.

“I thought Mitch Hancox was a real threat, I thought Jamie [Ward] was really lively all game, they both had shots from outside of the box and on another day they go in and you’re 2-0 up.

“For the penalty, we weren’t under pressure, it was an error of judgement 20 yards from goal and we eventually get the penalty against us.

“The lads seem to think that’s what happens to us at the moment, but we’ve got to get out of that [way of thinking].

“We shouldn’t have given the penalty away, I can’t remember Ryan [Boot] having any saves to make.

“They’ve not really troubled us and we’ve got beat, I feel for the boys, but I said to them that we’ve got to go again.

“If we put that kind of performance in against Bromley on Saturday, and Torquay next Tuesday, then we’ll give ourselves a chance.” 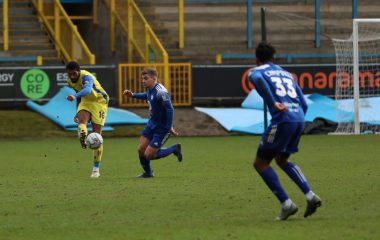 The visitors burst out of the traps with real intent at the Shay Stadium, rattling the frame of Sam Johnson’s goal early on through strikes from Hancox and then Ward in the opening quarter.

It was a bright start which failed to result in the breakthrough during a goalless half, but at least provided plenty of promise for more of the same after the interval.

But when the deadlock was eventually broken two minutes into the second half, the hosts’ hitting the front from the penalty spot following Callum Maycock’s foul was not what was written in the script.

Further chances for both Ward and Nathan Cameron threatened to bring Moors level, the former coming within inches of restoring parity with a sumptuous lob over the beaten Halifax goalkeeper but for a goal-line clearance.

It was the last meaningful action of a game which could easily have gone in the visitors’ favour, delivering a losing start for Yates but one which will not dishearten him too much.

Individual performances from both Reiss McNally and Cameron in the visitors backline did plenty to raise spirits of the Solihull boss, who added: “I wanted some pace and power, I thought he [McNally] provided that, he was excellent and didn’t put a foot wrong.

“Nathan was feeling his hamstring after 15 minutes, he proved what a warrior he is and he carried on, and that’s what we need.

“There were some really great individual performances, but also a decent team performance as well, so there’s a lot to give us hope for the remainder of the season.

“We’ve got to keep believing and driving people on to do the right thing, and we’ll be alright.”