Liam McDonald took the opportunity to give 17 members of his squad a run out, but it was the introduction of skipper Darren Carter at half time that turned the match on its head.

Carter handed Moors the lead on the hour mark when collecting the ball 25 yards from goal.

With Moors’ front men waiting in the six-yard area, the former Blues man curled a shot into the top corner of the net.

Following a first half which lacked clear cut chances, Carter’s goal provided the catalyst needed for Moors to kick on. 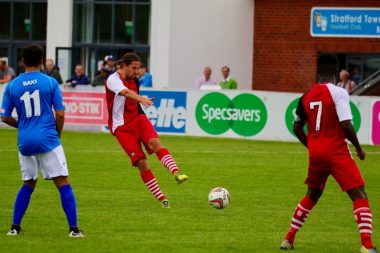 And nine minutes later George Carline doubled Solihull’s lead when he rose to head the ball out of the advancing Hylton who proceeded to take the ball around Frances before unleashing a hard shot onto the inside of the far post before it went into the corner of the net.

Stratford never let their heads drop and could have clawed one back with ten minutes left on the clock when Taylor bullied his way into the box forcing Trueman to save with his feet.

Grocott then tried his luck again but despite seeing it late Trueman produced the save of the match to palm it away to safety.

Moors are next in action on Tuesday night when they welcome West Brom XI to the ATG Stadium for their last pre-season game.

The club’s Vanarama National League campaign starts on Saturday when they welcome Chester.

Triathletes invited to take part in Lakesman in Lockdown

Alvechurch hold on to management team

Smith: Cricketers no strangers to life’s stresses and strains