Osborne spectacular gets Moors back on track 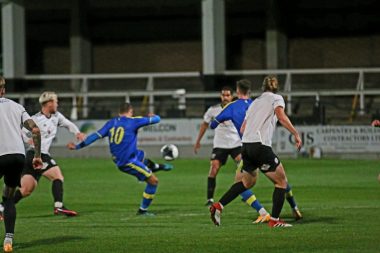 The 23rd-minute showstopper set Jimmy Shan’s side on their way to a 2-0 victory, with Jake Beesley heading Moors’ second just before the break at Edgar Street, as Solihull atoned for a last-gasp 1-0 defeat in Saturday’s first meeting.

In that particular fixture, an 89th-minute stunner from a Hereford trialist helped snatch victory, although the final outcome could have been far different had striker Adam Rooney put away some of the abundance of chances that fell his way.

With a host of changes made to the starting XI in midweek – no less than ten to be exact – the intention from Shan was clear to get back on track after the opening defeat of the season at the weekend.

And that desire to win was clear from the start, with Moors’ combination of silky passing play, dominance in the possession rankings and openings created suggesting that the visitors meant business.

Beesley almost had an early opener, following good work from James Ball to lay the ball on for left-back Jordan Cranston to deliver a pin-point cross, only for the striker to blaze his effort off target. 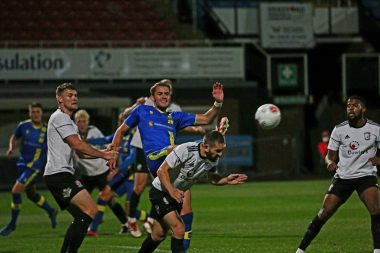 Just as in Saturday’s contest, the Bulls showed promise on the counter attack and kept debutant Niall Clayton busy in the visitors’ goal to ensure his clean sheet remained intact.

While there were heroics performed down one end, there was a moment of genius witnessed at the other side of the pitch.

It was another cross from Cranston which helped provide it, picking out Moors’ maestro Osborne – who flicked the ball up with one touch, and then hammered a sensational volley on the turn into the top corner to leave Hereford ‘keeper Paul White motionless.

Moors showed few signs of the wasteful finishing that deserted them in their previous encounter, and soon notched their second before the half was out.

This time the goal originated from a long throw by substitute Cameron Coxe into the path of Ball, who flicked the ball into Beesley’s path to lift a header over White and into the net. 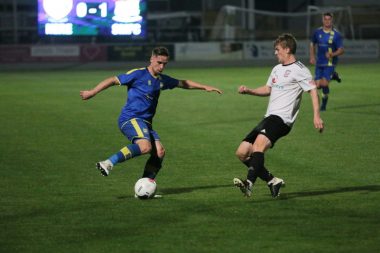 While there was no change to the scoreline in the second half with chances at more of a premium, the night will ultimately rank as a success for Shan after another stern test against National League North opposition.

Step Three opposition will be the order of the day again on Saturday, when a final warm-up in the form of Leamington awaits them at the SportNation.bet Stadium (3pm).