JIMMY Shan’s Solihull Moors dusted themselves down from a six-month absence with a goalless draw at Kettering Town on Saturday. 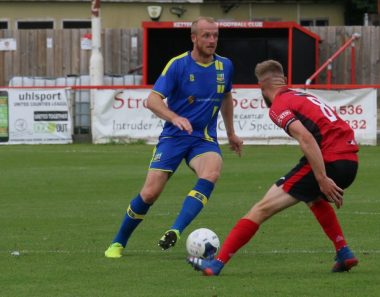 A real battle was expected from the National League North hosts in Moors’ first fixture of pre-season, and that is exactly what the Poppies provided at Latimer Park, showing real initiative to take the game to their higher-level opponents and going close to taking the lead through Josh Oyinsan’s curling effort.

The 25-year-old went closer still when firing over from a matter of yards, a miss that failed to punish a lacklustre Solihull side that were clearly struggling to get into their stride.

As far as the visitors’ chances were concerned, a Kyle Storer drive that glanced wide of the mark and a cross-shot from Jake Beesley were the only notable efforts from the opening half of play – leaving plenty to be desired from the second.

With a customary overhaul of the starting XI enacted at half-time, as is such in pre-season games, Moors immediately looked brighter and were only denied an opening goal from Adam Rooney by the raising of an offside flag. 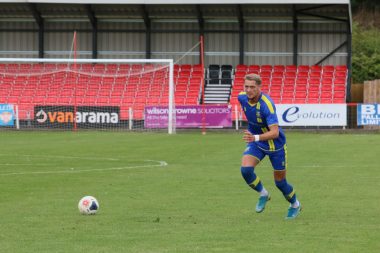 James Ball looks up for options. Picture by Richard King.

Momentum clearly started to build for the visitors and it only seemed a matter of time before the opener arrived, again Rooney at the heart of things when chesting down Stephen Gleeson’s through ball and firing straight at the goalkeeper.

A foul on another former Birmingham City man – this time Mitch Hancox – failed to result in a penalty as referee Andy Woolmer waved away strong appeals from the away side, a moment which appeared to spell an end to any further chances from either side.

While Solihull were unable to muster a winning goal, blowing away the cobwebs will be of utmost importance to Shan ahead of an even-bigger test against Championship opposition in Coventry City on Tuesday night.