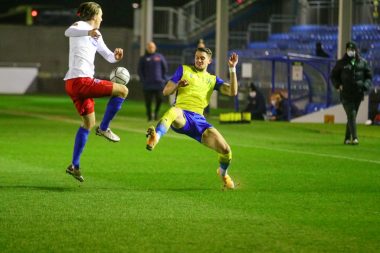 CAPTAIN Kyle Storer says there is more than enough substance in the Solihull Moors squad to turn a corner and put right recent bad results on the back of Tuesday night’s 1-0 loss to Dagenham & Redbridge.

In only their third game on home soil at the SportNation.bet Stadium this year, former Moors man Paul McCallum punished his ex-team-mates with a 57th-minute winner to edge it for the Daggers as Solihull slipped to 16th in the National League table after results elsewhere went against them.

It means Jimmy Shan’s side are now winless in four games and have only two wins from their previous nine games – a run which has provided a great deal of damage to their play-off hopes.

Despite the club’s woes of late, Storer remains confident Solihull can turn a corner – starting with Saturday’s home meeting with Maidenhead United – another side who have been out of sorts in the past month.

“We need more end product from all of our good play, to be ruthless in possession and have that killer instinct – which we haven’t had,” said the 33-year-old.

“Results will turn, you don’t become a bad team overnight, we’ve got some great individuals and we’re a good team.

“We’ll stick together and I’m more than confident that it’ll turn around. Fingers crossed we get a big three points on Saturday and we’ll move on from there.”

There were wholesale changes to the side that drew 2-2 with Boreham Wood at the weekend, with Shan bringing in Jordan Cranston, Darren Carter, Jordan Piggott and Storer to patch up a Moors side depleted by injuries and suspensions.

The two sides played the opening stages at a good pace and traded a number of half chances between them, one of the brighter openings falling to the hosts’ James Ball, who sent a deflected effort wide of the mark.

It was the Daggers who finished the half the stronger of the two teams, McCallum providing an early warning sign of what was to come after evading the home defence, but failing to find the finish to match from close range, while Elliott Johnson flashed a drive just past Ryan Boot’s post.

And just moments after an injury to Joe Sbarra saw Moors start the second period with a setback, McCallum rubbed further salt in the wound to break the deadlock, finishing neatly from Matthew Robinson’s left-flank delivery. 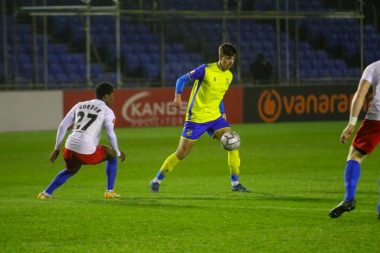 The introduction of Cameron Archer gave Dagenham’s rearguard plenty more to think about, with stern defending required to prevent the Aston Villa loanee from making more of an impact on the game.

Elliot Justham had to be outstretched to deny Ball’s goalbound drive, whilst a sumptuous delivery by makeshift defender Carter put the ball on a plate for substitutes Cameron Coxe and Kyle Hudlin, although neither could make the vital connection needed to earn a point late on.

The Solihull skipper felt the main downfall of his side came in the final third of the pitch, adding: “It was difficult to take, I thought we dominated large parts of the game without really having that killer punch in our play.

“For all of our good work, we didn’t create that one big chance for our strikers, they grew into the game as soon as they scored the goal in the second half.

“Credit to them, they game managed it quite well, we kept our structure and kept plugging away, but it just wasn’t to be because of our end product – it’s disappointing.

“I think they came out second half and pressed us higher up, they almost went three against three at the back, so they had a bit of impetus.

“They got the goal and controlled it for ten or 15 minutes after that, we had large spells where we just lacked that creativity in the final third – which is where your points are earned.

“I think we could have stopped the cross [in the lead-up to the goal], Paul McCallum’s alive to it in the box and puts it away. We say it a lot about defending crosses, but we need to put it right and we need to do it fast.”