A FIRST pre-season defeat for Solihull Moors failed to reflect the dominance Jimmy Shan’s side had in their 1-0 reverse to Hereford on Saturday. 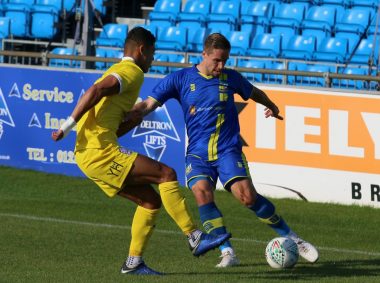 The National League North visitors won it in the final minute of play when a trialist slammed home an audacious long-range drive past the outstretched Niall Clayton to stun the Moors and gift Hereford a slender 1-0 win.

It was an afternoon that was not short of incident, with Adam Rooney having a penalty saved earlier in the game at the SportNation.bet Stadium as Moors’ best attacking efforts were in vain.

One of Solihull’s summer arrivals, namely Jordan Cranston, was afforded an opportunity in the fourth and latest warm-up – appearing on the left side of a back five which had their work cut out in the opening exchanges.

For all of the Bulls’ early promise, it was the hosts who made the biggest inroads to an opening goal when a Rooney strike flew past the post, while Joe Sbarra was denied expertly by Hereford’s impressive trialist ‘keeper.

Adam Rooney’s penalty is kept out. Picture by Richard King.

Next up, Alex Gudger offered his attacking services in search of a breakthrough – the defender planting a header wide and moments later chesting the ball down to Sbarra for an effort that came within inches of finding the net.

Stephen Gleeson should have done better when latching onto a pass from the omnipresent Sbarra, failing to apply much direction to his shot which only found the gloves of the visiting custodian as the half ended goalless.

Substitute Mitch Hancox made an instant impression after taking Cranston’s place, firing a dangerous cross into Rooney which was nudged off-target as the second half continued in the same vein as the first. 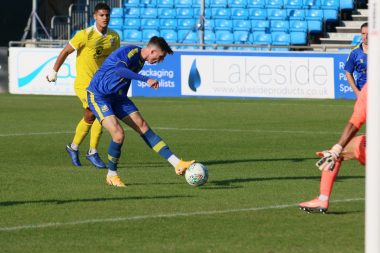 Again, it was Rooney who was at the forefront for the hosts, but again the same end result followed when shooting straight at the goalkeeper from Ben Clayton-Phillips’ through ball.

It became clear that it was not to be his day, when the former Birmingham City man was denied time and again by multiple further attempts.

A strike that seemed bound for the net was tipped away with 20 minutes remaining, and then, in more spectacular fashion, an audacious overhead kick cracked the crossbar from the resulting corner.

But amid the chaos that ensued in the box as the ball dropped, Sbarra was brought down by the ‘keeper and afforded Rooney the chance to convert from 12 yards.

Hereford’s inspired shot-stopper had other ideas though, and kept the ball out to spell a miserable night for the forward – one which came to an early end when his number displayed on the electronic substitution board to allow Jake Beesley to enter the fray.

Even his replacement could not change Moors’ fortunes in front of goal though, with a one-on-one chance spurned late on.

In typical fashion, the visitors scored against the run of play to snatch victory.

The ball sat up nicely for the Hereford trialist, and he could have done nothing more to impress Bulls manager Josh Gowling than with his long-range spectacular that decided it.

Moors will have little time to lick their wounds, as the two sides meet once again in the reverse fixture at Edgar Street on Tuesday night (7.45pm).