Moors must keep plugging away to turn the tide - Yates 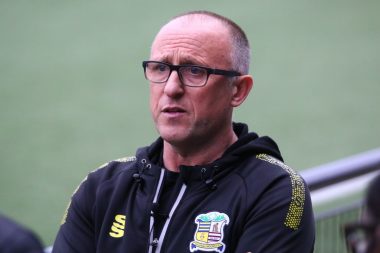 MANAGER Mark Yates says Solihull Moors are close to being on the right end of the scoring, but must keep working on their flaws in the coming weeks.

Saturday’s 1-0 defeat at Bromley, in which Joseph Kizzi netted a 78th-minute winner to deal Solihull a cruel late defeat, made it two defeats out of two for Yates since his return to the SportNation.bet Stadium hot-seat, keeping the Moors rooted in 17th place in the National League table.

With another tough test against promotion-chasers Torquay United coming up at Plainmoor tomorrow night, the Moors manager is keen for the focus and belief to remain with his group of players.

“Tuesday is the most important thing for us now, we want to make sure that we go down to Torquay and put the wrongs from the last couple of the games into both a performance and a result,” said the 51-year-old.

“We are so close to turning the tide, we could have had six points but we’ve got none – that’s how ruthless it is [the league].

“They can’t feel sorry for themselves, there’s been two decent performances where we’ve been competitive, played in good areas, created a few chances, but we’ve got to be ruthless at both ends of the pitch.”

One of two changes to the side that stepped out at Hayes Lane, Shrewsbury loanee Ryan Barnett slotted straight into the midfield a couple of days after signing a short-term deal with the club, joining Tyrone Williams in the starting XI.

The 21-year-old, who will remain a Moors player until April 14, was a constant threat for the visitors, delivering a number of crosses that were begging to be converted by one of his teammates. 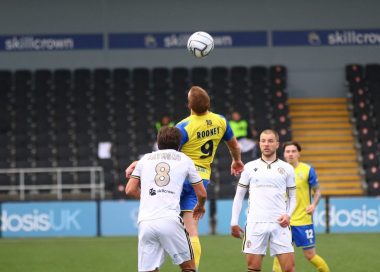 One of those deliveries into Mitch Hancox before half-time threatened to give Solihull a priceless lead, but the defender was unable to connect properly with the ball, whilst Courtney Duffus squandered a one-on-one opportunity down the other end in a goalless opening half.

Bromley upped the ante after the break and saw Jack Bridge twice denied by both Jordan Cranston and Reiss McNally, but were eventually rewarded by Kizzi’s header from a Frankie Raymond corner 12 minutes from time.

In response, Moors were positive, twice going close to a last-gasp equaliser when Justin Donawa arched a header just over the crossbar, whilst Jamie Ward’s thrashed effort forced Ravens goalkeeper Mark Cousins to scramble his way across goal to keep the ball out.

Yates remained upbeat in his assessment of proceedings, and added: “I thought we did really well and looked a good side, we were competitive.

“We knew that it was a tough place to come and what we had to deal with, we knew that they were going to be a threat from set pieces.

“I felt my back four with Tyrone [Williams] Reiss [McNally], [Cameron] Coxe and Jordan Cranston were excellent, they dealt with everything that they had to deal with.

“Neither ‘keeper was tested enough for both managers liking, but they found a way of winning – and that was the only difference.

“The good thing for me is that the attitude of the players and the work rate has been excellent, things have just not dropped for us.” 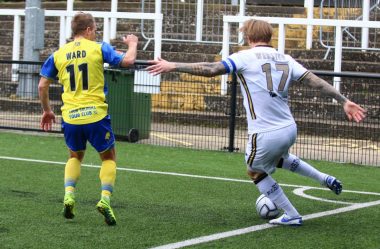 As far as Solihull’s injury struggles are concerned, the picture appears bleak for a few players in particular, with Nathan Cameron today having a scan on a hamstring injury which is set to keep him out for a few weeks, whilst midfielder Stephen Gleeson is set for six to eight weeks on the sideline after picking up a training ground knock.

Both Jamey Osborne and Callum Howe are also expected to miss the next couple of games at least, with no definitive date yet known for their return.

But with Barnett’s arrival at least helping boost Moors’ squad somewhat, Yates was unable to hide his admiration for the player.

“He’s a good player, I knew that so I was delighted to get him,” he said.

“I thought he offered us a real outlet out there, he put in three or four really good crosses and gave us an attacking threat – and that’s what I’ve brought him into the club for.”