Moors must buckle up for Saturday's opener - Howe 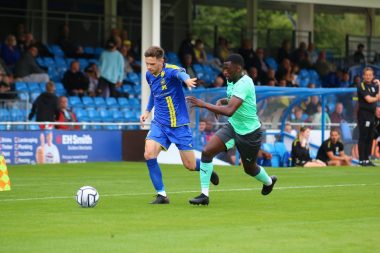 DEFENDER Callum Howe has called upon Solihull Moors to leave the mistakes accumulated in their final warm-up draw with Notts County behind them, ahead of Saturday’s National League opener against Wrexham AFC.

Quickfire goals from debutant Andrew Dallas and Howe gave the hosts a clear advantage at half-time at the SportNation.bet Stadium, before Cal Roberts and a Ruben Rodrigues penalty restored parity in the 2-2 stalemate, which Moors ended with ten men following Adam Rooney’s injury with no substitutes remaining.

In spite of the understandable frustration of surrendering a two-goal lead, the 27-year-old – who endured a frustrating 2020/21 season with injuries – re-iterated the need to not read too much into the end result.

“I think we’ve got out of it what we’ve needed,” said Howe, in reference to both the result and pre-season overall.

“It was a disappointing result in the end, in the second half we didn’t keep our standards but overall it’s been a good pre-season – the lads are feeling fit and strong and I feel that we’ll be ready come Saturday.

“I’ve had a good pre-season, joined in with everything the lads have done and played two lots of 90 minutes now, so as far as I’m concerned I’m ready to go.”