A TRIP to Woking’s Laithwaite Community Stadium is on the horizon for Jimmy Shan’s men after Solihull Moors discovered their first opponents for the season opener on Saturday, October 3. 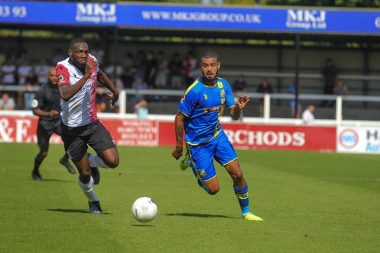 Now former Moors forward Paul McCallum, right, in action in Solihull’s 2-0 defeat at Woking in the last meeting between the sides. Picture by Tom King.

The Cardinals, managed by Alan Dowson, finished tenth in the National League last term based on the points-per-game agenda, and were 2-0 winners last time the sides met in August last year.

Consecutive home fixtures then follow immediately after the first game, with a midweek clash with Wrexham on Tuesday, October 6 and King’s Lynn Town on Saturday, October 10 issuing a long-awaited return for competitive football at the SportNation.bet Stadium.

As far as the festive fixtures are concerned, Moors fans will have home comforts on Boxing Day against Chesterfield, followed by trips to Macclesfield (December 28) – now managed by former boss Tim Flowers – and the reverse game with the Spireites (January 2).

Moors will finish the campaign at home to Eastleigh on Saturday, May 29, at which point they will hope to have made a good enough case for a promotion bid.

Fixtures are in full:

Saturday 1st May: Wrexham (A)

Saturday 22nd May: Wealdstone (A)