Low scoring game brings Berkswell back down to reality against Dorridge

CRICKET: AFTER experiencing the heights of a last ball victory the previous week, Berkswell crashed back into reality with a devastating 73 run loss against local rivals Dorridge.

Having won the toss, Berkswell skipper Dominic Ostler invited Dorridge to bat first – a decision which could come back to haunt them later in the year.

The pair managed to move the score to 41 by the end of the 11th over, and David Brignull’s introduction into the attack started an acceleration in the scoring rate as Ball hit 20 runs off one single over.

With Dorridge nicely placed on 83, Grant Thornton came into the attack and tasted immediate success when Ebad (22) was caught behind while Nick James then picked up the wickets of Ball (58) and Ahmad (0) in his first over.

At 87/3, the momentum swung back in Berkswell’s favour.

And when three more wickets fell in quick succession – in the 24th, 25th, and 26th overs – the visitors were firmly in control of the game.

Two further wickets were lost in the 32nd and 33rd overs as Berkswell reduced Dorridge to 146/8.

That soon turned to 152/9 and one over later Dorridge were all out for 152, losing their last ten wickets for a dismal 69 runs.

Grant Thornton proved to be the pick of the Berkswell bowlers with five wickets for 24 runs while James chipped in with four wickets for 42 runs.

Coming out to bat after the tea interval, Berkswell’s openers Mohammed Ahmed and Mark Best found a noticeable change in the wicket against the Dorridge opening bowlers Jamie Ayres and skipper Ball. 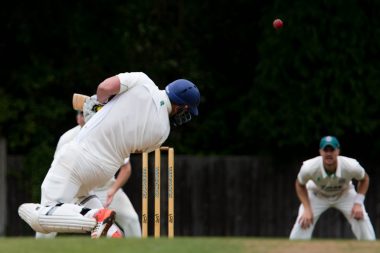 Bowling at medium pace, the bowlers had the ball moving about off the seam and also managed to produce variable bounce – making batting an impossible challenge.

Ahmed (7) was bowled by Ayres in the fifth over, and Best (0) was then bowled by Ball in the sixth.

Chris Whittock (3) didn’t last long before being given out lbw in the eighth over and Tom Milnes (9), also given out lbw, was on his way back to the pavilion in the 11th over.

With the majority of Berkswell’s key run makers already out with the score on 29, it was left to Tom Lewis and Nick James to rescue the situation.

However, Lewis, who had faced 18 balls of differing bounce and pace off the wicket, then cut the ball hard to gully only to see the ball rebound from the fielder’s hand into the waiting hands of Ball at slip.

Skipper Ostler (0) made his way to the middle to partner James, but he too struggled to come to terms with the playing surface and only lasted 14 balls before he too was given out lbw to a ball that hit him just above the ankle.

When Thornton (4) was also adjudged lbw, and Sidebottom (0) was caught behind three balls later Berkswell had slumped to 43/8 by the end of the 22nd over.

A patient and spirited partnership of 27 runs in eight overs between James and Gately (24*) eventually came to an end when James (21) pulled a ball from spinner Iftikhar Ahmad to Ball at short mid-wicket.

The innings finally came to a close in the 33rd over when Brignull (0) was bowled by Ebad to give Dorridge the victory.

Next Saturday, Berkswell return to Meeting House Lane where they will host Worcestershire based Ombersley who currently occupy fourth place in the league table.

Pears and Bears aces hope for Test places against Windies

Brits are loving the return of football, with 53 per cent watching matches over the weekend