THERE WAS derby-day delight for Earlswood Town in Midland League Division Two after a crushing 4-0 defeat of local rivals Hampton on Saturday. 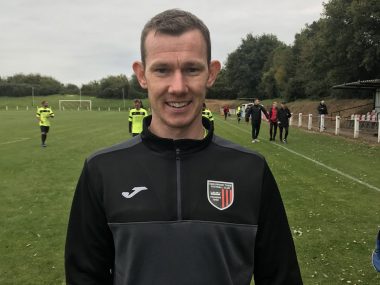 In the battle of Solihull, debutant Danny Kerrigan netted twice after being afforded his first-team bow, while Jordan McKenzie and substitute Matt Pemberton – who opened his account for the season – completed the rout of the ten-man hosts at Field Lane.

Kerrigan only required 18 minutes to find the net after combining with another man making a first Earls appearance – right-back Connor Nowaczyk – who fired a low cross into the striker’s path to score.

And it was double delight for Kerrigan when calamitous Hampton defending handed the visitors a second goal five minutes later.

A mix-up led home goalkeeper Connal Dowling to be caught out of position, leaving the new Earls man the simple task of guiding the ball into an empty net with his head.

With a stronghold of the game, the away side had all of the encouragement needed to chase more goals.

The best that Hampton could muster was a 25th-minute close-range effort from Jamie Smith that was well kept out by Town’s Dan Farr, who was then forced into a stunning one-handed save to deny Wade Malley’s net-bound header.

Matters went from bad to worse for the hosts when Smith was then given his marching orders moments later, also joined by assistant manager Shaun Edwards, for poor misconduct.

While the man disadvantage did not make a telling impact on the game in terms of chances created for the remainder of the half, Earlswood began to increasingly press their advantage in the second half as the game became stretched.

Returning to his feet, the Town forward crashed home his spot-kick to essentially put his side out of sight.

While Hampton toiled in their bid to resurrect any comeback hopes late on, it just was not to be their day with the lack of real threat to Farr’s goal.

With options on the bench and plenty of breathing space, visiting manager Tom Reynolds’ decision to throw Pemberton into the fray was instantly rewarded when the striker hammered a fourth and final goal of the afternoon high into the net with 20 minutes left to play.

Hampton’s misery could have been compounded further had Joel Hughes’ protests for a penalty been granted, although the call had no impact on the final scoreline.

Victory sends Earlswood into third with their third win from four games, ahead of a home clash with Feckenham – while sixth-placed Hampton aim to bounce back when welcoming Northfield Town on Saturday (both 3pm).