Ari Karvelas grabbed three wickets for the visitors as some consistent top order batting helped the home side amass 308 for seven.

And the South African, who blazed 34 from only 15 balls, was then also responsible for K&D’s batting high point as five wickets from seamer Andy Sutton bowled the visitors out in the 30th over for 133.

This fifth setback of the campaign was more than balanced by the seven wins as Jack Grundy’s team complete their campaign behind only Berkswell, Leamington and Kidderminster.

“It was a disappointing end to the season at the end of a difficult week where we lost players to injury and unavailability,” said Grundy. 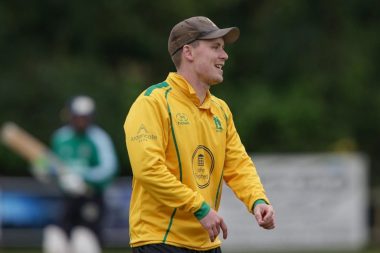 Captain Jack Grundy reflected on a top-five position in the final standings.

“It was epitomised by us losing a player in the warm-up.

“We then didn’t bowl and field as we have all season and were never able to get Barnt Green under four runs per over.

“They then bowled well at the top of our innings and there was no way back from there chasing over 300.

“That left us in fourth place but on a positive note we have improved gradually as the season has progressed. Our challenge now is to carry that on next year.”

And after Banton fell for an even-time 59 and K&D product Dom Harding added a breezy 27, Amrinder Brar dominated his 97-run fifth wicket alliance with Chapman-Lilley.

Barnt Green’s keeper struck nine fours and two sixes in a 41-ball 69 which provided a major injection of tempo during the closing stages of the home innings.

Karvelas also eventually ended anchor man Chapman-Lilley’s excellent 127-ball knock at 70 as the home side closed their 50 overs on 308 for seven.

Teenage spinner Umar Shaikh finished with the fine figures of 1-29 from ten overs while Chris Cheslin’s compensation for a rare wicketless day was finishing the season in the league’s top ten bowlers thanks to his 33 league wickets.

This left the visitors on the ropes at 60 for six before Karvelas struck five fours and a six in his violent innings while Grundy found the rope seven times in a useful 47-ball 49.

But home skipper Darrel Williams (2-11) had the last word as Barnt Green reversed their defeat at the hands of K&D in last month’s Archway Bathrooms Floodlit T20 Cup final.