Jake is the Bees-knees as Moors hold Coventry 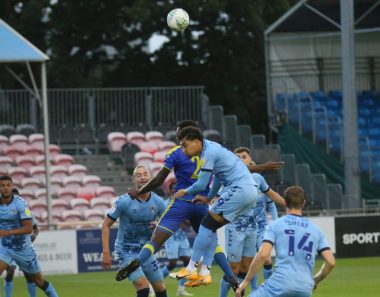 The ball had some air time in Tuesday’s contest. Picture by Richard King.

The 23-year-old had already struck earlier on the night to haul Moors back on level terms after Jordan Piggott’s own goal broke the deadlock for the Sky Blues two minutes after the restart.

And for all of Coventry’s efforts to go back in front with what looked like the clincher from Jack Burroughs five minutes from time, Beesley was on hand to spoil the party two minutes later.

From manager Jimmy Shan’s point of view, the chance for fitness levels to develop – and not the impressive result – served as the most important aspect of Tuesday night’s exercise.

“At this stage it’s about everyone making sure they have 45 minutes in their legs again,” he said.

“Following on from the game on Saturday against Kettering I thought we were much better. Our shape, with and without the ball was far better, and an unbelievable test from Coventry – who are a week out from finishing pre-season and have played loads of games.

“We’re week two into it, we’ve got another four weeks before the start of the season – it can only keep improving and getting better.”

While Solihull enjoyed the better share of possession in the early stages, it was the visitors who made the biggest inroads to taking the lead with a couple of close attempts. 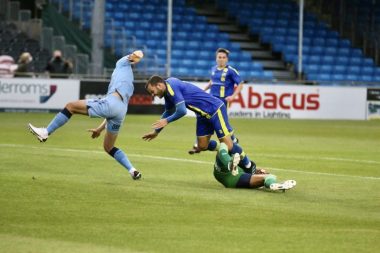 Jamey Osborne was then involved with a direct free kick attempt that failed to trouble City custodian Tom Billson, before putting a corner kick on a plate for Alex Gudger but the defender was unable to make full connection with his header.

Skipper Kyle Storer will feel aggrieved he did not fire the hosts into the lead just after the half-hour mark, as he mishit a defensive clearance that fell invitingly into his path.

A final attempt of the half for Osborne might well have gone in had the strike taken a deflection off one of the defenders placed in front of Billson, but the goalkeeper saw the ball all the way and claimed it to keep the sides deadlocked at half-time.

With a new XI taking to the pitch for the Moors in the second half, a perhaps expected blip came two minutes in when Hilssner’s low cross deflected in via Piggott.

The hosts showed plenty of endeavour to turn around their fortunes and so they were eventually rewarded when Beesley finished off from Ben Usher-Shipway’s right-flank delivery in the 67th minute.

Solihull’s trialist goalkeeper did well to deny Coventry’s Maxime Biamou, but he could do little to prevent Burroughs rippling the net after a deflection spun the ball out of reach.

Shan had no reason to fear with Beesley on the pitch, as the striker came to the rescue with an instinctive finish.

It could have been all the more sweeter for Moors and their talisman, however, had Billson not swooped down so low to keep the ball out with his legs moments after Coventry had kicked off again.

Judging the overall performance, the Solihull manager had enough to be pleased about from the night.

“I was delighted with the tempo, the intensity of the game – it was a really tough test,” Shan added.

“There weren’t enough spells of us being dominant and controlling it, but there are certainly some positive signs for us to build upon.”

The pre-season games continue to come thick and fast for Moors, with Leamington posing the next test at the Phillips 66 Community Stadium on Saturday (3pm).