FOOTBALL: MARCUS Bignot made it a leaving performance to remember as he marked his final game as manager of Solihull Moors by masterminding a superb second half fightback at Yeovil Town in the FA Cup, reports John Clothier.

Moors found themselves 2-0 down at Huish Park following a long journey to Somerset on Saturday in the first round of the FA Cup, but after the home side were reduced to ten men, a brace from Jack Byrne earned Moors a 2-2 draw and ensured their name was in the hat for Monday evening’s second round draw.

Bignot was without the services of skipper Ryan Beswick who remains injured and Darryl Knights was serving the second of his three-match ban.

Yeovil were quickly into their stride and looked for an early goal with Whitefield unleashing a powerful 20 yard shot which forced Danny Lewis into an expert save on three minutes and Khan headed a Dawson cross wide of the target.

The hosts did manage to go in front in the eighth minute when Hedges combined well with Dawson before the Swansea loanee fired a low shot past Lewis into the bottom corner of the net.

Almost immediately full back Smith caused panic as his cross landed on top of the net, but Solihull were starting to make their presence felt in the final third although not penetrating the back four. Jamie Osborne tried a speculative effort from 30 yards but keeper Krysiak was ready while at the other end Lewis saved well with his legs to keep out Whitfield’s close range effort.

Andy Brown tested Krysiak on 31 minutes following good work from Harry White and Moors failed to capitalise on a free kick after Khan clattered Murombedzi as it remained 1-0 to the home side at the break.

The Glovers were straight back on the front foot following resumption of play as the impressive Eaves forced Lewis into another fine save but from the clearance Dolan shot from 20 yards before his goal bound effort was finger tipped away for a corner. 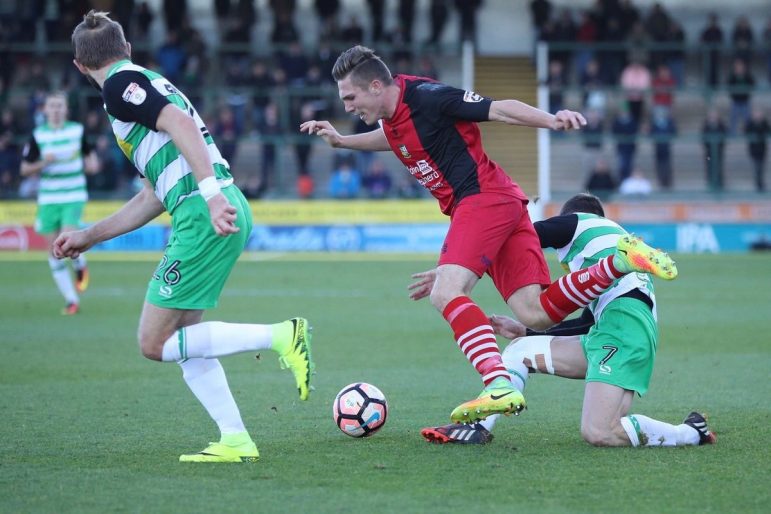 A second goal came when Connor Franklin was penalised for a dubious high tackle on Whitfield some 25 yards out and Khan despatched a peach of a shot over the wall and beyond the stranded Lewis and with just six minutes of the half on the clock Solihull were two down.

Moors seemed re energised by the deficit and straight from the restart pounded the Yeovil goal as Muromdedzi forced a good save from the keeper.

However the turning point came on 54 minutes when Dawson was shown a second yellow card for a second foul on Osborne and that was all the visitors needed as they made full use of the numerical advantage.

Byrne was so close then from all of 25 yards but made no mistake on 63 minutes when a long Franklin throw fell to the Moors mid fielder who volleyed in his second goal from 15 yards.

Osborne shot over whilst at the other end Shephard did likewise and Eaves had the ball in Moors net but was offside.

Omari Sterling James put in a pin point cross on 84 minutes but Brown headed wide with just Krysiak between him and the second round. Dolan tried his luck in added time but his speculative effort from 25 yards was wide as it all ended square.