INTERVIEW: Promotion may come a 'year too soon' for rampant Olton

HOCKEY: PROMOTION from the Western Conference this season may be a ‘year too soon’ for Olton hockey club, according to first team skipper Alex Edmonstone.

Edmonstone is guiding Olton through their first season in the sport’s second tier, in which the top side will battle in a playoff series at the end of the season to gain promotion to the Premier League – the highest tier of hockey in the UK.

Though Olton sit just eight points short of league leaders Exeter University, the club has only lost two of their opening ten matches – drawing four and winning the other four.

It puts the borough side in a good position ahead of the start of the second half of the season in February, but Edmonstone suggested his side needs another year in the second tier to adjust to fast nature of the league.

He said: “Everything was a bit unknown at the start of the season. We hadn’t played before in this conference.

“Naturally our ambition is to reach the playoffs and the Premier League.

“This year might be too early as we lost a lot of experience last season and our head coach.

“This year is a chance to develop some of our younger players, we are a young squad and it’s good to see the next generation gaining some minutes.

“A couple of them were playing third team hockey last year, now they’re competing in the Western Conference.

“We’re keen to push our young players into the first team. We’re a relatively young squad with an average age of around 25.” 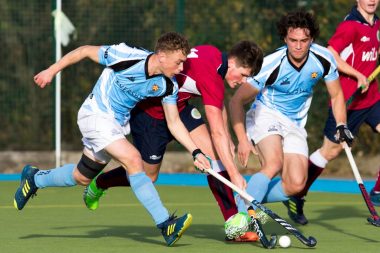 A positive start for Olton faded in November when a series of draws restricted Edmonstone’s men from maintaining their position in the top half of the table.

And turning draws into wins is the key to success for the Olton skipper.

“The start was brilliant, we earned some good wins and played good hockey,” said Edmonstone.

“As the season has gone on things have levelled out. We picked up plenty of draws and some of those games we should’ve won.

“Saying that we’ve only lost twice which is a positive. But as the season goes on we’ll need to convert these draws into wins.

“There has been moments of sloppy play, but we’re a better team than our league position suggests.”

Not only does the league present its challenges on the pitch, but also off it.

With teams based as far south as Exeter, organisation is key for Olton’s league campaign.

“Mileage wise we are travelling further than last year, but we’re going down the M5 more often than not and that’s an easy run.

“The league is so competitive this year. Unlike last year when there was one team aboce the rest, this year everyone can take points off of everyone.

“And it will only get more competitive as the season goes on.

“The league break is welcome, especially after our run of five draws.

“It’s nice to take a step back and assess the second half of the season.

“The indoor game will help us relax, have fun and keep the legs going.”

Olton will be using the league break wisely though to brush up on some skills by playing indoors.

The skipper said: “Playing indoors will make a welcome chance.

“We’ll all take the tournament seriously but indoor hockey isn’t as full on. It’s a different style.

“But what we learn from indoor hockey will benefit our play outside. It’s a much faster game.

“This will be our second season playing indoor hockey, and we knew there would be benefits.”