The game lived up to its billing as one of the last to survive before the government’s announcement that all football would be postponed indefinitely due to the coronavirus.

Prior to the clash, Earlswood had been one of only five teams to beat Solihull all season and again they proved worthy adversaries on an enthralling night of non-league entertainment.

Solihull started brightly and were unlucky not to find themselves ahead in the opening ten minutes as left-back Harry Eden rattled the crossbar from outside the area.

The hosts were lively and on the half-hour mark, Hudlin teed up Miracle Okafor whose rasping shot was expertly tipped onto the bar by Earlswood keeper Dan Farr.

Then against the run of play, the Earls took the lead. A wicked deflection saw Matt Pemberton’s long range effort loop over United keeper Lewis Lounders and into the net.

However, their advantage didn’t last long and as half-time loomed, Okafor beat the offside trap to coolly finish into the bottom corner. 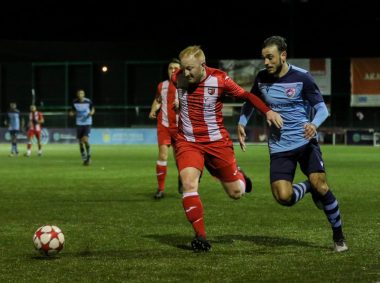 But the drama wasn’t done there and with seconds to go until the interval, Earlswood regained the lead.

Gary Walker pumped a long free kick into the box, Lounders was beaten to the ball by Leadun Dunlevy who headed against the post but Harley Street nodded in the rebound.

Controversy ensued as Solihull centre-half Kevin Joshua had attempted to clear but the linesman was convinced the ball crossed the line in spite of protests from the home side.

A close call and a poor goal to concede, leaving the leaders trailing 2-1 to Tom Reynolds’ side at the break.

The second half started slowly although just after the hour mark, Earlswood almost nicked a third but after poking in again from close range, Street was this time denied by the flag. 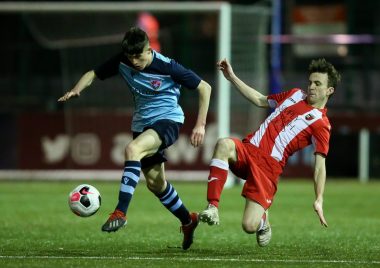 That decision appeared to galvanise Solihull and in a ten-minute spell, the game became the Kyle Hudlin show.

First he showed a real calmness to crash home a rebound from the edge of the area after Dylon Bennett’s initial shot had been beaten away by Farr.

Then the forward showed the predatory instinct that sees him topping the league’s goalscoring charts by prodding home after Eden’s free-kick was only partially cleared.

In the lead for the first time in the game, it should have been a case of batting down the hatches but two minutes after the goal, Solihull’s Achilles heel came back to haunt them. 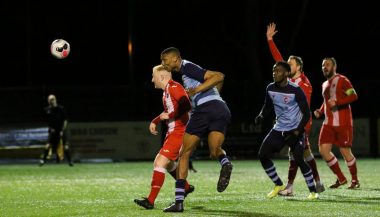 Walker’s long punt up field again caused trouble, the ball was not dealt with by the home defence and Street was on hand to double his tally for the evening.

It looked as if defensive frailties would cost Manoochehri’s young side dearly but then Hudlin popped up to smash home to complete his treble.

Collecting the ball on the left, he shrugged off the defender and unleashed a ferocious effort that crashed against the inside of the upright before nestling in the other side of the goal.

An unbelievable way for Hudlin to mark his first goals for his new club, but the excitement wasn’t finished there.

With virtually the last kick of the game, the visitors almost snatched a point but following a mass scramble Lounders pushed a goal bound header to safety.

Relief poured from the Solihull coaching staff as the referee blew the final whistle and celebrations ensued from the home side.

It remains anyone’s guess how the league will pan out but after this win Solihull have given themselves a very good chance of claiming top honours.

One thing is for certain though, if that is to be the last ball kicked in the MFL Division Two this season, oh what a night! A fantastic advert for the lower echelons of the game.

For the latest ongoings at the club, head to @SolihullUnited on Twitter.