History there to be made, says Moors Women boss Healey

MOORS Women manager David Healey is targeting a scalp in the Vitality Women’s FA Cup when play resumes next month.

With the lifting of the ongoing national lockdown forthcoming on Wednesday, December 2, Solihull Moors Women will have just under two weeks to prepare and ready themselves for their first round trip to Lincoln City.

Incidentally, it is the first time that Moors have reached this stage of the competition, having seen off Sporting Khalsa and Bedworth United in the qualifying rounds.

Coupled with a strong showing so far in the FA National League Division One Midlands, with Moors flying high in fourth, and there is plenty of reason for all connected with the women’s team to be cheerful.

While Healey felt the temporary suspension of the season was a tough pill to swallow with momentum subsequently stunted, he is still urging his team on to go and create further history in this year’s national competition.

“It was difficult for everyone related to the women’s team when the season was temporarily postponed,” he said.

“The girls have had a very positive attitude throughout lockdown and have put in some hard work supported by the coaching staff.

“We can’t wait to regroup after lockdown, and we will give everything we have to cause another cup upset against Lincoln City.” 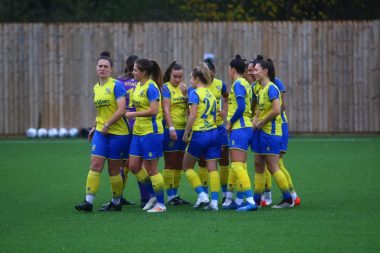 With no fixture before the trip to the Imps, Solihull will have to rely on the limited group training sessions that remain, with only one further league game against Long Eaton United [Sat, Dec. 20] following their cup exploits until the year is out.

In line with COVID-19 restrictions, Moors players have been forced to train individually at home, or by being inventive through online sessions with fellow teammates.

Though the lack of fixtures during the Christmas period is one that pales in contrast to most other years, the Solihull boss is hopeful that his squad can continue their upward momentum in spite of the hurdles that continue to face them.

“It has been a very positive start to the season,” Healey continued.

“We have already accumulated more points than last season and we have managed to progress further in the FA Cup than any point in our history making the first round proper stage.

“We conducted some great recruitment in the summer, following the vision and profile the coaching staff and chairman had agreed upon.

“We also brought in a number of fantastic backroom staff to supplement the team already within the club.”