In the reverse fixture, Hampton and Solihull had been indebted to a lower-middle order rally to chase down a tricky target, and so it proved again as their strength in depth saw them home by just two wickets.

Earlier in the day, stand-in skipper Johangir Khan had won the toss and opted to bowl – a decision which looked questionable as Highway put on a quickfire 85 for the opening wicket through the aggressive Billy Dyal (30) and Sam Lucas.

The occasional bowling of Mark James (38/1) saw the partnership broken with the first ball of his spell, as Dyal chipped a simple return catch to arrest the scoring rate.

Matt McCarthy (19) took the total beyond 100 with Lucas, before the metronomic Mike Palmer (24/3) trapped him LBW, at which point Chris Hughes entered the attack.

On a wicket which was showing signs of turn, Hughes ran through the Highway middle order, with only Amandeep Hallet (24) and James Moynihan (16) reaching double figures.

Hughes also had the well-set Lucas caught on the boundary for 72, as the Highway innings stuttered in the middle overs.

Palmer then returned to good effect, clean bowling Scott Johnson and Josh Bains in successive overs, before Hughes, who had switched ends at this point, dismissed Shaun Burdett to leave Highway bowled out for 193 inside 45 overs. 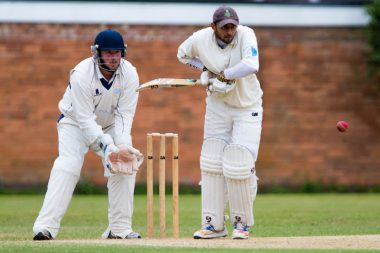 The last eight wickets had fallen for 58, with Hughes returning with 32/6 to shift the momentum firmly back to the home side.

Injuries in the field sustained by both regular openers Mark James and Dan Christopher meant that H&S began with the makeshift pair of Hughes and Matt James opening the batting.

They progressed the score to 33 before Hughes (23) fell to a stunning catch at square leg by Dyal off the bowling of Rory Curran (37/1).

Dyal himself then entered the attack in conjunction with fellow spinner Hallett, and between them they restricted the scoring rate, as well as utilising the turning wicket to good effect.

James (32) was caught on the mid-wicket boundary with the score on 74, and despite the calming presence of Khan at the other end, a succession of single figure scores ensued as the middle order succumbed to Dyal (2-30) and Hallett (3-36), who claimed the next 5 wickets to fall.

Khan remained having brought up his 50 not long after having survived a caught-and-bowled chance off Dyal, and in conjunction with Palmer they built a partnership with time very much on their side. Successive boundaries to bring the runs required down to single figures, and when Burdett overpitched Palmer drove straight down the ground to seal victory for the home side.

Palmer finished 24* whilst Khan led the chase with a fine 72*.