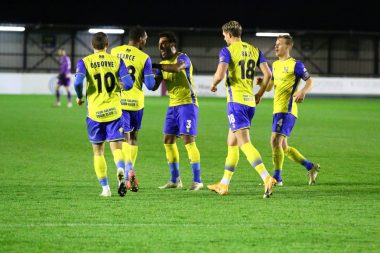 While the Pools were left shorthanded by Timi Odusina’s straight red card at the end of the first half, Moors found the visitors from County Durham a tough prospect to break down – eventually prospering through Krystian Pearce and James Ball goals after the interval.

It may not have been vintage Moors, despite the expected dominance they enjoyed in the second period as a result of the numerical advantage, but it is a key victory for a Solihull side previously hit by an enforced two-week break from National League action due to positive COVID-19 tests.

That factor may well have played a role in Saturday’s 4-2 FA Cup second round exit at the hands of League Two Morecambe after extra-time, a game in which Kyle Hudlin and Jordan Cranston both netted, so there will have been relief for Shan and Co that Solihull managed to get back to winning ways at the first time of asking.

Speaking on the performance, the Moors boss made his desire for his squad to be tactically sharper evident.

“A clean sheet and three points, I’m really pleased in that sense, but in terms of performance I’m utterly disappointed,” said Shan.

“I thought they were the better team up until the sending-off, I was ready to say some stern words at half-time to the players.

“Tactically they matched us and played the same shape as us. I take a lot of pride in being tactically better than the opposition and I thought up until the red card they were the better side.

“It was a little bit like an attack versus defence session [in the second half]. They camped in and got bodies in and around the ball and it was difficult to penetrate and break down [their defence].

“The opening goal came at a good time and meant we could approach the remainder of the game differently, my frustration was that we came trying to play passes between the lines – they were content to sit off us.

“That aspect of game management has to improve, we’ve got some very experienced players, they have to organise better.

“Hartlepool had two or three chances down to ten men in the first half on the counter and probably again in the second half – that cannot happen.”

On a happier note, Shan paid tribute to Gudger’s dedication to Moors’ cause after seeing out the entirety of the game following a two-month lay-off, adding: “He’s a massive player for us and credit to him for shaving ten days off his original timeframe to return from injury.

“He’s came back and played 90 minutes, the sending-off probably helped him in reducing his workload and physical output, but it’s really pleasing to have him back.”

With loanee Jordan Archer, Ball and Gudger taking the places of Hudlin, Joe Sbarra and Mitch Hancox at the SportNation.bet Stadium, it was the former who laid on the first real attempt of the game to Jamey Osborne and the cultured midfielder’s effort forced Henrich Ravas to tip the ball over the bar.

Gavan Holohan came within inches of giving the visitors the lead with a shot that packed plenty of finesse – beating Ryan Boot but clattering against the woodwork to deny a breakthrough.

Then, with Moors attempting a breakaway moments later, a late challenge by Odusina brought the main talking point of the night when the referee showed a straight red card eight minutes before the interval.

Buoyed by the Hartlepool dismissal and the chance to regroup at half-time, Moors threatened through a Cameron Coxe header which threatened to dip below the bar, although Holohan again reminded the hosts of his threat when forcing Boot into a near-post stop.

The long-awaited opener eventually arrived on 63 minutes, when Pearce touched home a goalbound drive from Cranston to outwit Ravas.

While further openings proved fruitless, Ball made sure of victory with seven minutes to play – pouncing on Tyler Magloire to win back possession before picking out the bottom corner of the net.

Tenth-placed Solihull visit second-placed Sutton United on Saturday, but will have to wait to face Dover Athletic after Tuesday night’s original fixture was postponed owing to positive COVID-19 cases in the Whites camp.