CRICKET: NOT even an impressive hat-trick from fast bowler Lee Golding was enough to stop Hampton and Solihull claim an impressive home win against high-flying Rugby in the Warwickshire Premier League.

Home skipper Tim Keyte won the toss and opted to bat on a day which saw Warwickshire League games using the same pink match balls that will be used in the upcoming England vs West Indies day/night test match at Edgbaston.

Rugby made good use of the new ball with Matt Ewer (1-46) and Henry Wilkins (1-18) bowling with control.

Ewer picked up the first wicket as Dan Christopher (9) was caught behind by stand-in captain Henry Parker.

Giles Clements (13), Johangir Khan (14) and Mark James (17) made starts before all were caught behind.

Lee Golding was then brought into the attack. 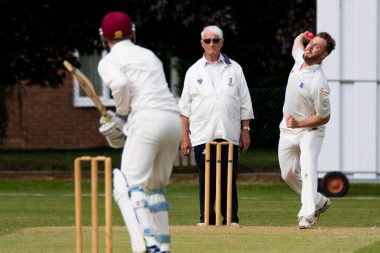 He had Mark James caught smartly at second slip with the last ball of his fourth over, leaving the score at 67/3.

He then clean bowled Matt James (7) with the first ball of his next over, and then had Chris Mason caught behind to complete a fine hat-trick, and leave Hampton and Solihull reeling at 74/6.

Despite the confidence crushing hat-trick, Hampton rallied as Chris Hughes (19), Arslan Amin (23), and Safian Shakil (44) took the attack back to Rugby.

Partnerships of 43 and 47 for the seventh and eighth wickets helped Hampton reach a below par 168 inside 168 overs.

With Rugby posting 300 runs or more in four of their previous nine games, Hampton appeared to have their work cut out.

However a good early start for the home side saw Asaad Qureshi (2) fall at a second lbw appeal.

He was swiftly followed back into the pavillion by Raj Chohan (4), whose loose drive only found the hands of Gavin Heath at point. 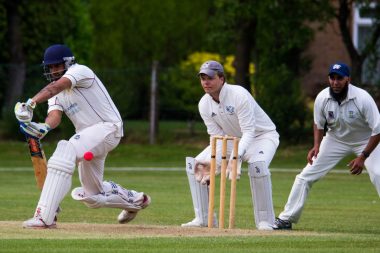 Amin then had the dangerous Ewer (1) caught, before Jamie Rosser (12) was deceived by a slower ball and chipped to mid-wicket.

A double bowling change saw Gavin Heath claim two wickets in the same over as Henry Wilkins cut straight to Mark James at point before Parker (0) was caught at gully by Clements.

The previously composed Charlie Robards (18) was then bowled by Keyte, and at 49/7 the Rugby top order lay in tatters.

Together they added 72 for the eighth wicket to take the put the game back in the balance.

But Chris Hughes then trapped Smith lbw before having Golding caught at cover three overs later.

Cochrane then brought up his 50, but shortly afterwards he was bowled by Keyte to leave Rugby all out for 134.

After the 34 run victory, a delighted H&S skipper Tim Keyte said: “To come away from today with 24 points is an excellent result and shows the character of the lads.

“Safian applied himself really well to give us something to bowl at, and to see everyone contributing with the ball is really pleasing.

“Results like today and last week’s draw at league leaders Bedworth gives us a lot of confidence going into a big game next week at Coleshill.”