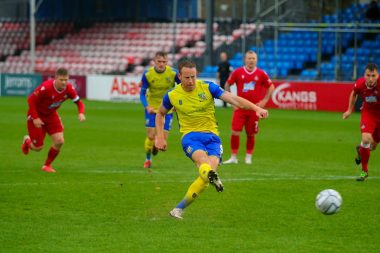 SPIRITS will be high ahead of tonight’s FA Cup first round draw following Solihull Moors’ dominant 4-0 win over Wrexham in the final qualifying round last weekend.

The Moors sailed through against their National League counterparts thanks to a Joe Sbarra double, an Adam Rooney penalty and one for loanee Cameron Archer at the SportNation.bet Stadium, giving Jimmy Shan’s men a real lift for both their forthcoming league fixtures – the next away to Stockport County on Tuesday night (7.45pm) – and the next obstacle on their FA Cup journey.

With clubs from League One and Two entering at this stage, Moors have a real chance of taking on Football League opposition – with notable names in Sunderland, Bolton Wanderers and Hull City all potential opponents.

Moors will be ball number 51 for tonight’s draw, which takes place tonight at around 7.10pm on BT Sport – in addition to the FA Cup’s Twitter and Facebook pages. 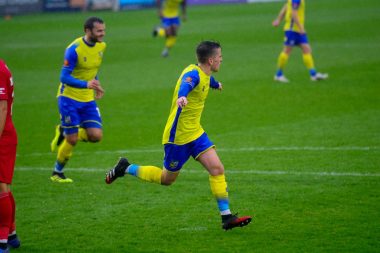 For Solihull manager Shan, while a fourth successive clean sheet offered the biggest positive from Saturday’s win, he still wants to see his team iron out a couple of issues.

“I think we could’ve been two goals to the good in the first ten minutes, it was a very good first-half performance,” he said.

“In saying that, with my high standards and high demands I wanted a little bit more – I wanted an extra ten or 15 percent with and without the ball.

“I wanted to move the ball quicker and get the ball back in play because I thought we were dominant.

“We probably could’ve pressed with a bit more purpose and intensity, but I’m obviously delighted with the result and overall performance of course.

“That’s four on the spin now [Moors’ clean sheets] and we’ve had to endure all kinds of different waves of attacks and different styles over those four games. 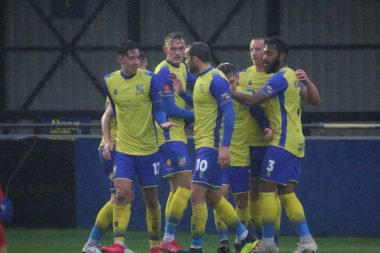 Solihull Moors had plenty to celebrate on Saturday. Picture by Richard King.

“We’ve handled teams that want to play through us and try and penetrate us. We’ve handled directness, so it just shows the organisation and the structure, as well as their character to want to keep that clean sheet.”

Two changes were made to the Moors side that triumphed 1-0 against Boreham Wood with Mitch Hancox stepping into the back-three in place of the suspended Darren Carter, and Callum Maycock replacing the injured Stephen Gleeson in midfield.

Solihull looked confident as they rightly should on the back of a three-game winning streak in the National League – which includes a 1-0 victory over the Welsh side at the beginning of October – and took control of the opening stages.

Captain Kyle Storer went close inside the opening ten minutes, making a late run into the box and firing just wide of the mark.

While the pouring rain had an impact on affairs, Moors still managed to go through with their passing game. 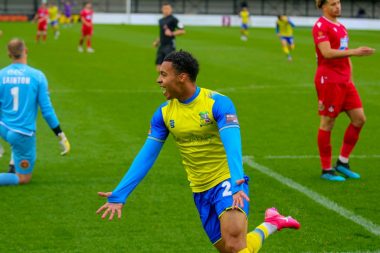 Cameron Archer wheels away after netting the third. Picture by Tom King.

Rooney should have done better when going through on goal but failing to test Red Dragons ‘keeper Rob Lainton, while former Moors full-back Jamie Reckord almost struck against his previous employers with a shot that flew just past Ryan Boot’s post.

Dan Jarvis forced Boot into a fine stop next as opportunities began to fall more frequently, with the next opening providing the long-awaited breakthrough on 39 minutes.

Cameron Coxe burst down the right flank and attempted to pick out Rooney with a cut-back, the resulting clearance to Sbarra being hammered into the net via a deflection to the joy of his teammates.

While a slow start to the second period followed, two goals in the space of three minutes helped the hosts confirm their passage into the next round.

After Hancox found himself on the wrong side of a Wrexham defender when receiving from Jordan Cranston’s pass, the former Birmingham City player was brought down inside the box – offering another ex-Blues man in Rooney the chance to crash the ball home from 12 yards in the 59th minute. 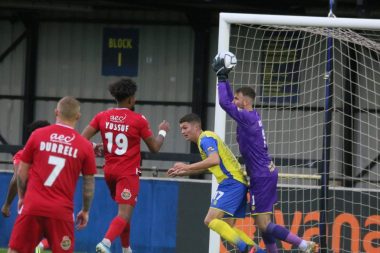 It was the turn of another face from the Second City, this time Aston Villa loanee Archer to add to the scoresheet three minutes later, with a delicate chip over the onrushing Lainton following Coxe’s through ball.

Sbarra made sure of the victory with 14 minutes to play, tapping home from James Ball’s square ball across the penalty area for the simplest of finishes.

Moors will have their work cut out against table-toppers Stockport tomorrow night, with the Greater Manchester club winning four of their five league fixtures to date to lead the table on goal difference.

While County have won both league fixtures at Edgeley Park so far this term – beating both Halifax Town and Dover Athletic – a penalty-shootout defeat to Chesterfield following a 1-1 draw in Saturday’s FA Cup qualifying clash ended their 100 percent home record, one which Moors will hope to dent further on their travels.