FOOTBALL: AN IMPRESSIVE five-game unbeaten run came to an end for Solihull Moors after they lost out to a physical Gateshead side as Liam McDonald’s men began their 2017 home campaign with a defeat.

The visitors showed why they have been tipped to be in the promotion hunt come the end of the season with goals in either half by Nyan Bell and Sam Jones earning them all three points on a day when Moors struggled to find any creativity in front of goal.

It took both sides a long time to find their feet on what was a very wet surface at The Automated Technology Group Stadium on Saturday.

The first sight of goal came when Nyall Bell turned his man on the edge of the box and unleashed a powerful shot which looked goalbound, but Liam Daly put his body on the line to make an important block.

The visitors however did not have to wait long to score the opener and it was that man Bell who produced the only real moment of magic in the opening period with 21 minutes gone.

Moors showed their sloppy by side by giving the ball away on the edge of their own penalty area and the ball was played into an unmarked Bell who beat Danny Lewis with a neat low finish.

The hosts were struggling to create any noteable chances although Harry White was working hard in attack.

On the half-hour mark Gateshed could have extended their lead further when Jamal Fyfield delivered a low cross into the box which found Jordan Burrow who took a touch before blasting the ball high over the Moors goal.

Minutes later Jamey Osborne dragged a weak shot wide of goal before Gateshead could and maybe should have gone in two goals to the good after Burrow did well to head the ball down for Bell by the penalty shot but he volleyed high over the bar when he should have hit the target. 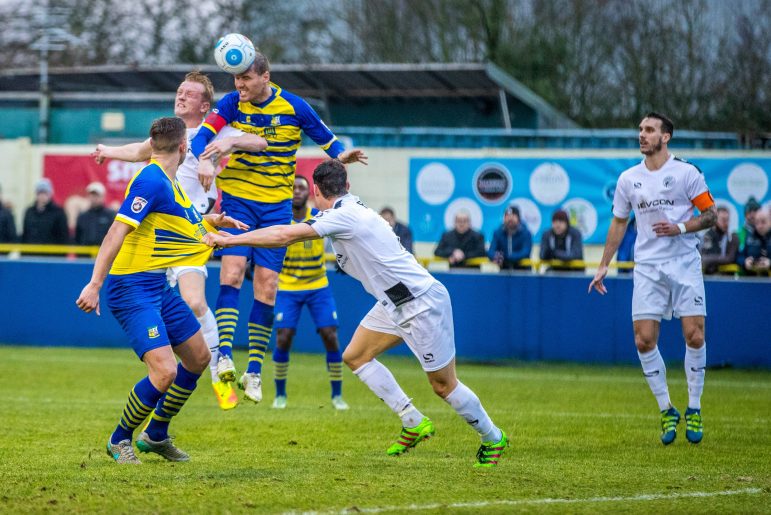 The visitors picked up where they left off in the second half and Lewis had to be alert to keep out Hannant’s low shot after the tricky winger had cut inside on his stronger left foot.

At the other end the hard-working Harry White had Moors’ best chance of the match so far. Gateshead keeper Dan Hanford slipped while gathering the ball and after stealing possession, Harry White unleashed a powerful shot which took a deflection and whistled inches wide of the target.

The game could have changed when Gateshead defender Jamie Bolton took down substitute Pearson Mwanyongo down the right and he was the last man. By the letter of the law the home support and players had every right to demand a red card but the referee opted for a yellow instead.

On 70 minutes Lewis kept McDonald’s side in the match again when he produced a superb finger-tip save to keep out Mufuta’s powerful effort which looked destined for the top left-hand corner.

In one final throw of the dice McDonald introduced both Asante and Maye in a bid to force an equaliser and Moors enjoyed their best period of the game without testing Hanford.

A quick counter saw York set up Hannant but again he was denied thanks to a reflex save by Lewis and moments later Asante should have done better when he dragged a low shot wide of goal.

It had been a tough afternoon for Moors against a physical Gateshead side and the visitors were able to wrap up the win deep into added on time when Lewis was eventually beaten for a second time after a cheeky back heel by Sam Jones.