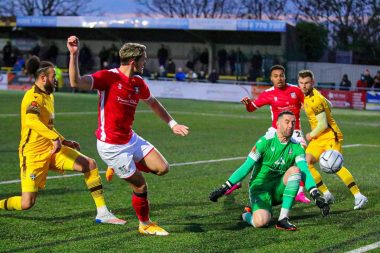 BELOW PAR Solihull Moors were punished for a lack of bravery during a 4-1 National League downfall at Sutton United, says manager Jimmy Shan.

An own goal from goalkeeper Ryan Boot and a Tobi Sho-Silva strike just before half-time put hosts Sutton in control, while James Ball’s reply moments after the restart was ultimately in vain after David Ajboye and Aaron Simpson put the result beyond doubt in the final 20 minutes at Gander Green Lane.

With Moors succumbing to a third league defeat this term, Shan says the final outcome was never in doubt given the balance of play.

“It was unacceptable, I think the first 45 minutes or so we’ve played as poorly as we have all season,” said the 42-year-old.

“I think we probably had a handful of moments where we looked anything like we have in training or in previous games.

“They were up and at us and in our faces a lot, we just didn’t deal with their physicality.

“Sometimes maybe people get a bit demotivated about coming to play on a plastic pitch, we’ve maybe had one or two do that and I’ll be speaking to the players about their mindset.

“We didn’t display any bravery or any mentality to do the things that we do well.”

“I thought second half there was a response, we had a really good 15, 20 minute spell but then they start being intelligent and begin breaking the game up.

“There were lots of slow restarts, the third goal was a killer for us – at that moment it was almost game, set and match.

“I don’t think our performance could have worsened – with or without the ball – in that first 45 minutes. You can’t come to a place and not defend the directness and have a bravery to get on the ball.”

Four changes were made in all to the team that saw off Hartlepool the previous midweek, with Justin Donawa, Mitch Hancox, Callum Maycock and Jamie Ward all afforded starting berths in South London.

After an even opening, United hit the front on 22 minutes when Isaac Olaofe’s rasping drive struck the post before being diverted into the net via the despairing Boot.

While Donawa almost restored parity with a sweetly-struck effort that flew past Dean Bouzanis’ post, the visitors remained a threat themselves and almost doubled their advantage when Craig Eastmond’s goal-bound shot forced Boot into a stunning save.

But then came a hammer blow, arriving in the form of Ajboye’s slaloming run and Sho-Silva’s composed finish three minutes before the break.

Shan’s half-time words looked to have instigated a momentary revival when Ball flicked home a cross from Ward with his heads seconds after the restart, the midfielder almost doubling his tally moments later when testing Bouzanis at his near post.

The hosts withstood Moors’ best efforts before killing off the game once and for all.

Sutton’s third on 72 minutes, a counter attack leading to Ajiboye rounding Boot and tapping into the net, was followed by Simpson’s deflected blast that deceived the Solihull ‘keeper five minutes from time.

With momentum stunted by a second loss in four league games, Shan is urging his troops to be more street smart in the pursuit of points and a subsequent ascent up the table

“Looking at our league form going into that game, we’ve kept six clean sheets out of eight games – sometimes we’ve been on the side of having some good luck and other teams not capitalising on their chances,” he said. 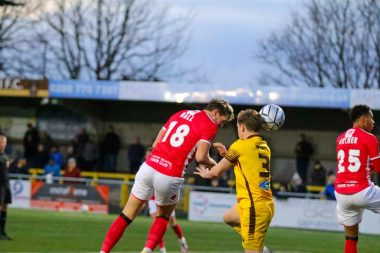 “The majority of those clean sheets have come when we’ve been the most dominant team with the ball.

“We keep talking about wanting to control the game, we want to do that by penetrating and going forward, but there are also times when you should control possession and defend with the ball too.

“We have got a big squad and we’ve got strength in depth. Some people had a chance to come in and claim a starting place and didn’t do so.”

With no midweek fixture, 12th-placed Moors will have had a full week to prepare for their next encounter – a home game with Bromley, who are fifth, on Saturday.