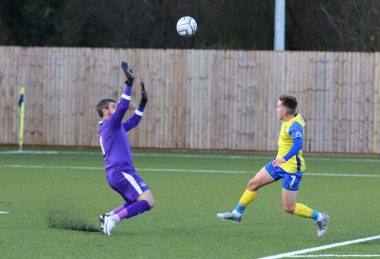 A TRIP to Aldershot Town awaits Solihull Moors in the fourth round of the FA Trophy, following Saturday’s 4-0 third-round thrashing of Farsley Celtic.

Jimmy Shan’s side were a class above their National League North opponents at the SportNation.bet Stadium, with Kyle Hudlin on the scoresheet for a second game in succession to set the tone for the afternoon, leading Krystian Pearce, Cameron Archer and Mitch Hancox to follow suit in hitting the net.

With a tie at a fellow National League outfit on the horizon for Moors, in full knowledge of a last 16 place that awaits the winners on Saturday, January 16, the prospect of a trip to Wembley could edge ever closer come full-time in Hampshire.

Judging by the efficient nature in which Solihull dispatched travelling Farsley at the weekend, there is enough evidence to suggest that the club could be amongst the front runners to win the competition.

From the perspective of Shan, the most important takeaway from the result was building on a midweek win over FC Halifax Town.

The 42-year-old said: “We got a foothold in the game and returned to our ways of controlling things. There was a lot of control in the opening 45 minutes, we got in behind their backline on numerous occasions and probably should have been two or three up at half-time.

“Credit to them, there was a lot of uncertainty before kick-off, whether we were going to play the game or not.

“I don’t think either manager could have deemed the pitch playable, it had a lot of water in a lot of areas but fortunately they agreed to play on the 3G pitch and get the game underway.

“I applaud the boys’ mentality to get on with it and put on the display they did.

“Their directness at times caused us a couple of problems, I thought we defended wide play quite well, I would have liked to have stopped more crosses coming into the box, but on the whole we did that well.” 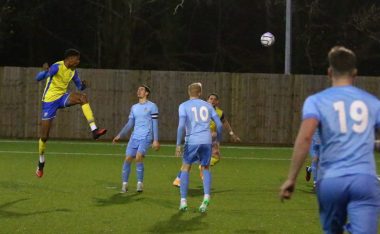 And there was particular praise for goalscorer Hudlin – who netted his third of the season to get the scoring underway – and teammate Jordan Piggott – who played a big role in helping Moors claim a first clean sheet in four games.

“When he came in he was more than what people perceived him to be,” said Shan, on Solihull’s towering six-foot eight striker.

“Ironically the things that you expect from him – he was probably a little bit loose with his back to goal and his ability to secure possession – but he’s pulled another one out of the bag.

“We pride ourselves with a clean-sheet mentality, it always gives you a foothold whether you play well, good, bad or indifferent.

“I thought we had a ruthless mentality in the final third and we took opportunities to play behind their backline and in-between to create chances.

“”n recent games Jordan’s come into the team and we’ve had back-to-back clean sheets in his last two performances for the club, he’s been in and around the team, but I think he’s been really hard done by with the squad that we’ve had available.

“The boys that came in did well and contributed massively to help us get through to the next round of the Trophy.”