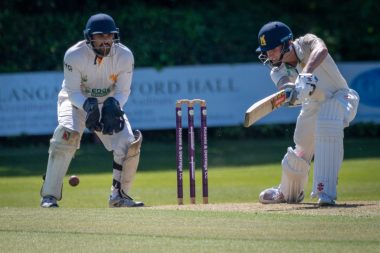 While Knowle & Dorridge outgunned their rivals at the crease, they were unable to see through the win at Station Road. Picture by Harish Chavda/www.dingleimages.com

Hosts Knowle & Dorridge laid down a marker with their score of 315-6 in 55 overs, but they could not grab the final Moseley wicket as the visitors ended on 225-9 to take seven points.

Fourth-placed K&D remain in contention at the right end of the table, level on points with Smethwick who had a maximum-points win over Shrewsbury, whilst seventh-placed Moseley still have some work to do to advance into the top-half.

After winning the toss, Knowle were in the mood for runs, and openers Neil Dexter (28) and Alex Phillips (64) shared a stand worth 43 runs.

With both Dexter and number three batsman Amir Khan (0) gone in quick succession at 44-2, a mammoth effort by Phillips with Ethan Brookes (115) stole the show as the duo put on 105 runs for the third wicket.

Centurion Brookes oversaw a short-lived partnership with James Middleton (22) before joining Sam Reddish (37) in an 85-run stand before both were removed from the crease in the space of four balls to leave K&D 277-6.

Martin Donald (30 not out) and Aristides Karvelas (8no) then carried their side over the 300-run mark, leaving the Griffs with a mountain to climb.

While opener Asim Shoaib (5) fell quickly, Moseley to their credit chipped away valiantly at the hosts’ target score.

While there were no centurions in the visitors’ ranks to boost their run chase considerably, there were a number of names who starred – namely Abdullah Awan (38), Andrew Umeed (32) and Imandeep Kang (35) in Moseley’s top-to-middle order.

Umeed and Kang produced a best partnership of 52 for the fourth wicket but the Griffs could not keep up the run-rate as fearsome bowling from Dexter (3-38 and Mohammed Umar Shaikh (3-26) pegged them back.

When Usman Shabir (38) fell for the ninth wicket wih the score on 204, Moseley had the best part of seven more overs to navigate to avoid defeat at Station Road.

Led by tailenders Yadvinder Singh (32no) and Muhammad Raheem (4no), the Griffs did exactly that, maintaining their stay at the crease to deny their rivals a big win.