Earls mowed down by rampant Green 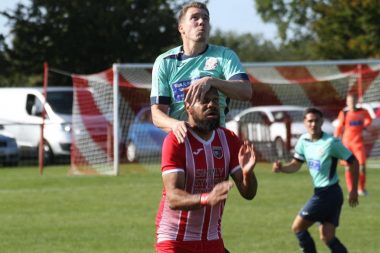 Joel Hughes’ fourth of the season was to no avail. Picture by Stephen Cave.

Victorious in their opening two games, the Earls were twice pegged back before the break and had no answer to the visitors after the restart in their 5-2 loss at The Pavilions.

All seemed rosy when Harry Street nipped in behind the Green defence from Joe Tobin’s through ball to score his second in three league games on seven minutes.

Coton Green gave an indication of their threat when levelling the scores eight minutes later, and what a strike it was from Kofi Durham.

Standing over a free-kick from range, he whipped the ball fervently around the wall and into the bottom corner at the near post, leaving Dan Farr with no chance.

The fast opening helped the game heat up considerably with chances falling to both sides.

Incidentally, just as the opening two goals hit the net within minutes of each other, so did Earlswood and Coton Green’s second of the game.

A quick turn inside the box from Joel Hughes panicked a Coton defender and resulted in a penalty being won after he was brought down.

Taking responsibility of the spot kick himself, Hughes then slammed home in the 32nd minute to restore the hosts’ lead.

But the advantage did not last long, as Michael Wright beat Farr in a foot race for a ball over the Earlswood defence to get in behind and side-foot into an open goal three minutes later.

Level at the break, it was anyone’s game going into the second half, though it seemed the visitors were the side more committed to grabbing the three points.

A goal two minutes into the half certainly helped matters for Coton Green after Chris Gumery punished slack defending from his old side to turn towards goal and then find the net.

The hosts were bereft of inspiration from then on in it seemed, something which only aided Green’s cause more with two further goals in quickfire time.

The fourth goal was provided by Dom Oliver’s neat finish in the 61st minute, followed by Harry Reece’s close-range effort two minutes after to complete a disappointing downfall for Town.

A Solihull derby away to rivals Hampton should help revive the Earls on Saturday (3pm), in a bid to improve their standing of seventh.

That will be no easy task for Reynolds and co. however, with their hosts unbeaten with two draws – including a 1-1 stalemate at Lane Head at the weekend – and two victories, pitching Hampton up in fourth.