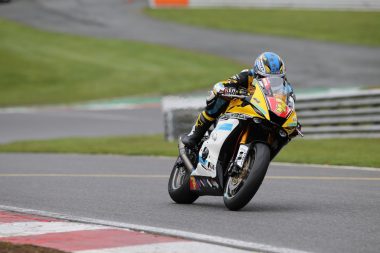 Liam Delves was unlucky not to make the podium at Brands Hatch. Picture: Dave Yeomans.

The 20-year-old impressed on Sunday despite a disappointing qualifying session which saw him finish 12th and start the opening race in the fourth row of the grid, bouncing back with two impressive results on the track in Kent.

In race one, Delves held 12th position after the first lap and started to make an ascent through the rankings as the race went on.

By lap two, he had risen to seventh, and by lap six had set the foundation to bypass Jack Nixon and Zac Corderoy into fifth.

George Stanley was next to fall victim to Delves’ momentum, as the Solihull rider held firm to keep his placing of fourth – despite his best efforts to creep into the top-three.

Such was his determination to stake his claim to a podium place that he finished just 0.385 seconds behind Kawasaki racer Caolan Irwin.

Despite the near miss, Delves set himself in good stead for the final race of the weekend and the Championship season with a starting position of the second row.

Again, his steady approach to proceedings meant he gradually rose through the standings.

By lap nine he again found himself in fourth with three laps remaining, giving himself a chance to make another top-three push.

While he made up ground on the leading pack, he could not get the better of TJ Toms – finishing just over a tenth of a second behind from a final podium of the campaign.

Commenting on the season finale, Delves said: “We have had a mega weekend here at Brands Hatch and I just missed out on the podium once again although I did manage to set a new personal best lap time which is good.

“I would like to say a massive thank you to everyone at TAG Racing for another perfect weekend and my sponsors and followers for all of their continued support.”