Delves keen to bounce back after rain halts race 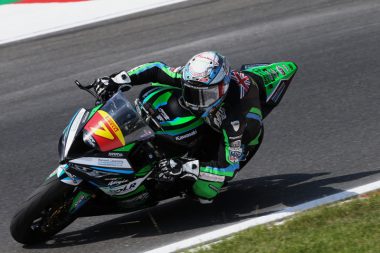 Liam Delves, pictured in action on the JR Performance ZX5R636 Kawasaki, was denied the chance to make further progress at the end of the Brands Hatch meet. Picture by Dave Yeomans.

SOLIHULL’S Liam Delves says he will not allow a tumultuous sixth round at the Pirelli National Junior Superstock Championship affect his mindset ahead of a trip to Thruxton this weekend.

It was an afternoon blighted by weather at Brands Hatch last Sunday, when a downpour brought a premature end to the event in the ninth lap, meaning the 21-year-old officially finished in eighth place – which he occupied at the time of the red flag.

Reflecting on the outing, he said: “It was a difficult weekend with every weather condition thrown in.

“I managed to complete my race in eighth after fighting my way up to fifth position the rain came and a red flag finished the race early, so it was a disappointing result to come away with, but we have some positives to take to Thruxton this coming weekend.”

Delves was in fine spirits going into the weekend having ended free practice in fourth, qualifying in eighth and with tyres adjusted in preparation for the wet conditions expected on race day.

Opening from the middle of the third row, he found himself in a well-contested battle for fifth place as he and his competitors regularly exchanged positions.

By lap eight, Delves found himself back in eighth place, just before the heavens opened and brought about the sight of the red flag.

The Solihull rider consolidates fifth place in the overall drivers’ rankings, a position he will aim to build upon after a quick turnaround.