SOLIHULL Moors striker Jake Beesley has today departed the club for League One side Rochdale for an undisclosed fee. 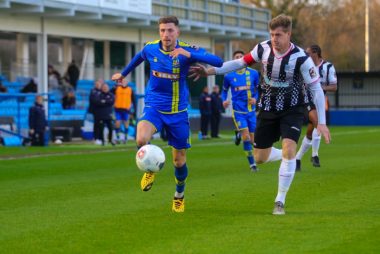 The 23-year-old initially joined Moors on a loan deal from League Two Salford City in October last year, hitting the ground running with a debut goal against Sutton United, before making his move permanent in January.

In all, the Sheffield native netted five times for the club in 29 appearances, catching the eye with some impressive performances in Solihull’s forward line which attracted the attention of third tier Dale.

Moors’ Technical Director Craig Cope spoke positively about the deal, pointing to the move as an example of the excellent developmental work that the club does to raise the profile and ability of players.

“We have modelled our playing squad to provide younger players with the platform to develop and improve,” he said.

“Jake has been with us for almost 12 months and although we were keen for him to remain a Moors player, it is fantastic to see him sign for a League One club.

“We are confident that, with the process in place, we will have more success stories like Jake and he leaves with our very best wishes.”