IT HAS been a positive start to the season by Solihull Moors as they mix it up with the best non-league football has to offer in the National League.
In his latest column for the Observer, skipper Ryan Beswick gives his views on Tuesday’s narrow defeat to leaders Forest Green and firstly looks back on Saturday’s record attendance against Tranmere.

“When we got promoted we looked at the fixture lists and these were the type of games we all picked out. Those are the type of games that bring more fans out because they’re a massive club.
“It was nice for us to get towards the 2,000 mark. It would be nice if we could get that every week but we know we’re still a small club making a name of ourselves at this level.
“It was a nice feeling to hear all the fans in strong voice and obviously they brought many along too, but our fans were brilliant.
“I think there were lots of board members who were proud to be there on Saturday but I couldn’t take the occasion in because I was running all over the pitch!
“I wouldn’t say the occasion got to us, I think it was more a case of we conceded a goal and then the scoreline flattered us and they showed a ruthless edge. That’s football.
“We competed well with them and on another day it could have been a different result. We had our chances too and it would have been nice to have got a goal back.

“We knew we could compete against Forest Green Rovers and we had a good chance at the end of the second half to take the lead.
“Liam (Daly) was unfortunate to score an own goal because other than that he didn’t put a foot wrong all evening.
“We could have even nicked it late on but we did alright and we’ll take the positives from the game.
“I thought I had a good view of the red card and I didn’t think it was a sending off. The referee said he could have gone for one of three things but I think he’s pulled out a red card because of the players’ reaction. It was a bit harsh and I don’t like to see players reacting to tackles like that.
“It was difficult to watch from the touchline because I wanted to be out there but I was proud of the boys who gave everything.
“We had a gameplan as always and the manager knows how he wants us to play. We tried to stop them playing and we were hopeful of nicking a goal ourselves so it almost paid off. 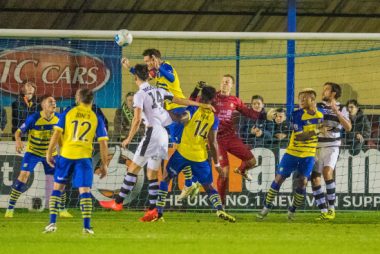 “We’ve been craving depth in squad for a some time now and it’s nice to get a few new faces in because it keeps people on their toes.
“It’s good for the amount of games coming up too because they’ll be a few injuries and suspensions which will takes its toll on the squad.
“They’ve all fitted in well. The gaffer signs players on their ability and personality so they’ve all settled in and it was good to see a few of those make their debut in the week.
“They’ll be hoping they’ve done enough to get into the manager’s thoughts for Saturday’s game now.

“It’s another big game on Saturday against a side who are scraping away for every point they can get.
“It’s a long trip for us but we’ll be heading there high in confidence off the back of Tuesday’s performance.
“We prepare for each game as it comes but we’ve got to know our jobs and handle the game well. We did the same against Tranmere and Forest Green but it didn’t quite work out.
“If we get our jobs right on Saturday we’ll have a chance and hopefully we can come away with the points to create more of a gap between ourselves and the relegation zone.
“I’ve had a bit of a groin problem recently and on Saturday it flared up a bit so Tuesday came a bit too soon. It’s nothing serious but hopefully I’ll be fit again on Saturday. I’ll travel with the boys and see what happens after a late fitness test but’s nothing serious.”